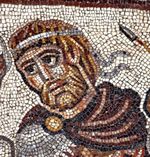 Above: part of a mosaic at Huqoq in Northen Israel

The Huqoq excavations, located in Israel’s Lower Galilee, are co-directed by Shua Kisilevitz of the Israel Antiquities Authority. Work has continued each summer since the 2012 excavation when the mosaics were first discovered at the site.

A mosaic discovered in the synagogue’s east aisle in 2013 and 2014 depicts three horizontal registers (strips) containing human and animal figures, including elephants. The top register, which is the largest, shows a meeting between two men, who perhaps are intended to represent Alexander the Great and a Jewish high priest according to Magness’s findings. It was the first time a non-biblical story had been found decorating any ancient synagogue.

During this summer’s dig, Magness and her colleagues uncovered additional portions of this mosaic, as well as the rest of a mosaic immediately adjacent to it, which is connected with a Hebrew dedicatory inscription that was uncovered in 2012.

New digging reveals that the inscription is in the center of a large square panel with human figures, animals and mythological creatures arranged symmetrically around it, Magness said. These include winged putti (cupids) holding roundels (circular discs) with theater masks, muscular male figures wearing trousers who support a garland, a rooster, and male and female faces in a wreath encircling the inscription. Putti and masks are associated with Dionysos (Bacchus), who was the Greco-Roman god of wine and theater performances, she said.

This summer’s excavations also brought to light columns inside the synagogue covered with plaster and painted ivy leaf designs.

“The images in these mosaics — as well as their high level of artistic quality — and the columns painted with vegetal motifs have never been found in any other ancient synagogue,” Magness said. “These are unique discoveries.”

In 2012, a mosaic showing Samson and the foxes, as related in the Bible’s Judges 15:4, was first discovered in the synagogue’s east aisle. The next summer, a second mosaic was found that shows Samson carrying the gate of Gaza on his shoulders, from Judges 16:3.

“It is not clear if there is a thematic connection between the Samson scenes and the other mosaics in the east aisle,” Magness added.

Sponsors are UNC-Chapel Hill, Brigham Young University in Utah, the University of Toronto in Canada and the University of Wyoming. Students and staff from UNC-Chapel Hill and the consortium schools participated in the dig. Financial support for the 2015 season was also provided by the National Geographic Society Expeditions Council and the National Geographic Society/Waitt Grants Program, and the Loeb Classical Library Foundation.

The mosaics have been removed from the site for conservation, and the excavated areas have been backfilled. Excavations are scheduled to continue in summer 2016. 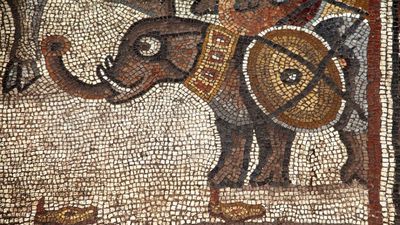 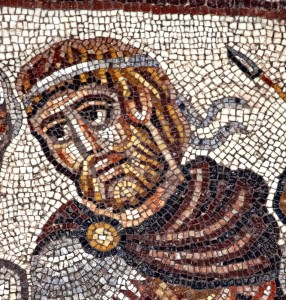