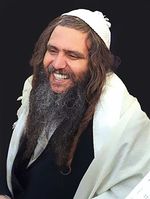 "The evil inclination of rabbis is even greater than that of other people," Rabbi Shalom Arush said, adding that he will not see women in person anymore, even if they are accompanied by their husbands.

Leading Breslov Rabbi Says No More Meetings With Women Because A Rabbi’s Temptation To Sin With Them Is Too Strong
Shmarya Rosenberg • FailedMessiah.com

"The evil inclination of rabbis is even greater than that of other people," Arush said, adding that he will not see women in person anymore, even if they are accompanied by their husbands, Arutz Sheva reported based on the Kikar HaShabbat report.

Arush was simply restating the normative Orthodox Jewish theology that states that the greater the person is, the greater his evil inclination is, Arutz Sheva contended.

“…Born in Morocco, he made aliya with his parents at age thirteen. After graduating high-school, he served in the Israeli Defense Force's elite naval rescue unit as an airborne combat-medic, where he took part in many clandestine missions.

“After completing his three year stint in the service, Rabbi Arush attended university, majoring in economics. During that time, five of his closest friends were killed in a helicopter crash while carrying out an army mission.

“At their funerals, the Rabbi wondered about the seeming futility of life. This tragedy was the catalyst for a complete metamorphosis in the Rabbi's outlook on the world, and eventually led to him discovering the truth of Torah and mitzvot.

“Rabbi Arush studied in several yeshivot until he finally discovered Breslev and studied under Rabbi Eliezer Berland. Rabbi Berland was so impressed with Rabbi Arush, that he asked him to be his personal assistant.…

Among Rabbi Arush's students, which number in the thousands, are famous actors and singers who left the glitter of secularism to lead a Torah-true life.…Another of Rabbi Arush's foremost students and his "English-language mouthpiece" is well-known author and radio broadcaster Rabbi Lazer Brody, best known for his award-winning web journal Lazer Beams.”

Sheinberg, who headed a Zionist Orthodox yeshiva and school network in the northern Israeli city of Sefat, was arrested early this month at Ben-Gurion International airport trying to flee Israel. He has since been accused by at least 10 women of sexual assault and rape, with another group of women, perhaps as many as 20, also accusing him of rape by deception after Sheinberg allegedly convinced them they needed to have sex with him to heal their fertility issues.

Berland, who heads the Shuvu Banim Breslov hasidic sect, fled Israel almost three years ago after several female followers charged Berland with sexually assaulting or raping them. Most of those women were young and married, although at least one was an unmarried minor at the time her assault allegedly took place.

Berland has fled from country to country to country, being expelled from some and fleeing arrest in others. Earlier this month after losing his last legal appeal to his looming extradition to Israel, Berland jumped bail and allegedly fled Holland using the passport of a follower or a forged document. Before this he was expelled from several countries, including Zimbabwe and Morocco, and narrowly escaped arrest twice in South Africa before fleeing it, also by allegedly using a forged passport or the passport of a follower.

"The evil inclination of rabbis is even greater than that of other people," Rabbi Shalom Arush said, adding that he will not see women in person anymore, even if they are accompanied by their husbands.