A one-and-a-half-year-old Palestinian baby was burned to death and three others were seriously injured after Jewish settlers allegedly set fire to a Palestinian home in the Palestinian Arab village of Douma, near Nablus in the West Bank.

Above: "Revenge!" spray-painted at the site of today's arson attack

A one-and-a-half-year-old Palestinian baby was burned to death and three others were seriously injured after Jewish settlers allegedly set fire to a Palestinian home in the Palestinian Arab village of Douma, near Nablus in the West Bank, Ha’aretz reported.

Several settlers allegedly spray-painted graffiti reading "revenge," "Long live the King Messiah" and "price tag" on the house and then broke its windows and then threw firebombs inside as its occupants slept. The settlers then ran away, leaving the home’s occupants to burn alive.

Palestinian officials identified the child as Ali Saad Daobasa. His father Saad and mother Reham, were seriously burned in the fire as was the couple’s 4-year-old son Ahmad. The three injured family members were rushed by the IDF to the burn unit at Sheba Medical Center.

The IDF confirms the one-and-a-half-year-old boy was burned to death, and that Jewish extremists are believed to be behind the attack.

Saad Daobasa was able to save his wife and older son but could not find the baby in the darkness and smoke because there was no electricity.

Ha’aretz reported that a local resident, Mesalem Daoubasah, saw four settlers flee the attack and head toward the Jewish settlement of Ma'aleh Ephraimas as several villagers chased after them.

Other witnesses allegedly saw the settlers smash the home’s windows and throw firebombs inside it.

The graffiti "Long live the King Messiah" may indicate a connection to Chabad-Lubavitch messianists linked to extremist Rabbi Yitzchak Ginsburgh and the Od Yosef Chai yeshiva he founded. Two of the school’s deans wrote a book bearing Ginsburgh’s endorsement that justified the murder of enemy babies in the time of war – which as defined by Ginsburgh and his followers would include  any period of time in which a hostile non-Jewish population occupies any part of the biblical Land of Israel. The justification given in the book for murdering these enemy babies is that they will in any case grow up to hate Jews, so it is better to kill them now if necessary.

Israel’s Internal Security Agency (known as the Shabak or by its initials, Shin Bet) and Israel Police said without direct attribution earlier this year that the vast majority of anti-Muslim and anti-Christian “price tag” hate crimes are carried out by Ginsburgh’s students, his followers and by people directly inspired by them. But they noted Ginsburgh may not know the details of the individual attacks until after they have been committed.

Even so, since that identification of Ginsburgh was made, none of Ginsburgh’s top followers have been arrested and neither has Ginsburgh himself. 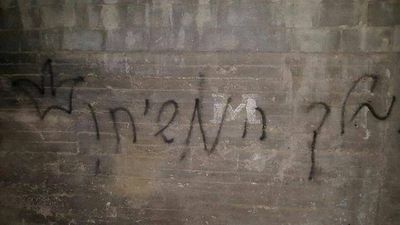 Above: "…Melech HaMoshiach!" and a crown from today's arson attack

A one-and-a-half-year-old Palestinian baby was burned to death and three others were seriously injured after Jewish settlers allegedly set fire to a Palestinian home in the Palestinian Arab village of Douma, near Nablus in the West Bank.