« Researchers Find Proof In Israel Of Earliest Ever Human Agricultural Cultivation | Main | Historical Video: Chabad Hasidim In Jerusalem React To News Of The Death Of The Last Chabad-Lubavitch Rebbe »

Increasing Prevalence Of Autism Due In Large Part To Marked Increase In Frequency Of Autism Diagnosis, Not Actual Increase In Autism Occurrence, Study Finds 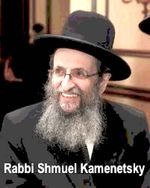 More evidence continues to roll in showing that anti-vaccine activists like haredi 'gadol' Rabbi Shmuel Kamenetsky and his wife are wrong. 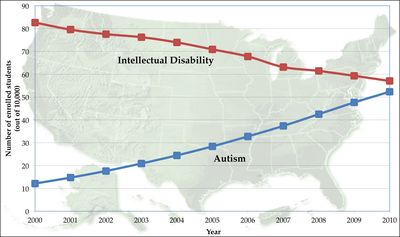 Above: This graph shows the number of students (per 10,000) diagnosed with autism (blue) and intellectual disability (red) in special-education programs in the United States from 2000 to 2010. The increase in autism diagnoses during this period was offset by decreases in the diagnosis of intellectual disability, suggesting that shifting patterns of diagnosis may be responsible for increases in autism diagnosis. Credit: Penn State University

The greater than three-fold increase in autism diagnoses among students in special education programs in the United States between 2000 and 2010 may be due in large part to the reclassification of individuals who previously would have been diagnosed with other intellectual disability disorders, according to new research. In a paper to be published online in the American Journal of Medical Genetics on July 22, 2015, scientists at Penn State University report their analysis of 11 years of special-education enrollment data on an average of 6.2 million children per year. The researchers found no overall increase in the number of students enrolled in special education. They also found that the increase in students diagnosed with autism was offset by a nearly equal decrease in students diagnosed with other intellectual disabilities that often co-occur with autism. The researchers conclude that the large increase in the prevalence of autism is likely the result of shifting patterns of diagnosis that are complicated by the variability of autism and its overlap with other related disorders.

"For quite some time, researchers have been struggling to sort disorders into categories based on observable clinical features, but it gets complicated with autism because every individual can show a different combination of features" said Santhosh Girirajan, assistant professor of biochemistry and molecular biology and of anthropology at Penn State and the leader of the research team. "The tricky part is how to deal with individuals who have multiple diagnoses because, the set of features that define autism is commonly found in individuals with other cognitive or neurological deficits."

Recent reports from the United States Centers for Disease Control and Prevention (CDC) suggest that there has been an increase in the prevalence of autism from 1 in 5000 in 1975 to 1 in 150 in 2002, then to 1 in 68 in 2012. Much of this increase has been attributed to increased awareness and a broadening of the diagnostic criteria for autism.  But this new research provides the first direct evidence that much of the increase may be attributable merely to a reclassification of individuals with related neurological disorders rather than to an actual increase in the rate of new cases of autism.

The researchers used data from the United States Individuals with Disabilities Education Act (IDEA) for students enrolled in special-education programs. Under IDEA, individuals are classified into one of thirteen disability categories including autism spectrum disorders, intellectual disability, emotional disturbance, other health impairment, and specific learning disabilities. Although many of the categories can co-occur in individuals with autism and show some of the same diagnostic features, children can be classified only under one category.

The research team noted more than three times the number of cases of autism in 2010 as compared to 2000; however, nearly 65 percent of this increase could be accounted for by a reduction in the number of individuals classified in the intellectual disability category in the IDEA data. The diagnostic reclassification of individuals from the category of intellectual disability to the category of autism accounts for a large proportion of the change, which varied depending on the age of the children. The researchers estimate that, for 8 year-olds, approximately 59 percent of the observed increase in autism is accounted for by reclassification, but by age 15 reclassification accounts for as much as 97 percent of the increase in autism.

"The high rate of co-occurrence of other intellectual disabilities with autism, which leads to diagnostic reclassification, is likely due to shared genetic factors in many neurodevelopmental disorders," said Girirajan. "When individuals carrying classically defined genetic syndromes were evaluated for features of autism, a high frequency of autism was observed, even among disorders not previously associated with autism, suggesting that the tools for diagnosing autism lose specificity when applied to individuals severely affected by other genetic syndromes."

The researchers also noted that the relationship between autism cases and other intellectual disabilities varied state-by-state. When assessed individually, states such as California, New Mexico, and Texas showed no relationship between the prevalence of autism and that of intellectual disability, suggesting that state-specific health policy may be a significant factor in estimates of autism prevalence.

"Because features of neurodevelopmental disorders co-occur at such a high rate and there is so much individual variation in autism, diagnosis is greatly complicated, which affects the perceived prevalence of autism and related disorders," said Girirajan. "Every patient is different and must be treated as such. Standardized diagnostic measures incorporating detailed genetic analysis and periodic follow up should be taken into account in future studies of autism prevalence."

In addition to Girirajan, other members of the research team are Andrew Polyak, an undergraduate student in Girirajan's lab, and Richard Kubina, professor of educational psychology, counseling, and special education at Penn State. This work was funded by the Penn State Huck Institutes of the Life Sciences and the Penn State Department of Biochemistry and Molecular Biology.

Increasing Prevalence Of Autism Due In Large Part To Marked Increase In Frequency Of Autism Diagnosis, Not Actual Increase In Autism Occurrence, Study Finds

More evidence continues to roll in showing that anti-vaccine activists like haredi 'gadol' Rabbi Shmuel Kamenetsky and his wife are wrong.