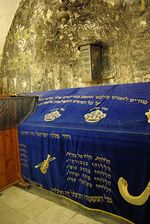 The Israel Tour Guide Association (ITGA), which represents about 2,500 tour guides, has filed a complaint with the both the tourism and public security ministries, claiming that haredi and right-wing Zionist Orthodox activists at the purported tomb of King David on Mount Zion in Jerusalem are interfering with and harassing foreign tour groups, Ynet reported.

According to the tour guides, Israel Police have failed to handle the issue.

Haredi and hard right-wing Zionist Orthodox protesters have been trying to block Christians from entering the site, which is holy to all three monotheistic religions.

There is an official division of space at the site that largely keeps each religion separate from the others, but haredim and hard right-wing Zionist Orthodox have violated it in recent months because reports that government and the Vatican are negotiating a deal that would hand control of the holy site to the Catholic Church. – something the government and the Vatican deny is true.

The tour guides’ letter to the tourism and public security ministers said the site is now under the de facto control of "a radical haredi group that is doing as it pleases there."

The guides also said there is no regular police or security presence at the entrance to the compound and that the “radical haredim” and hard right-wing Zionist Orthodox who frequent the site take advantage of that vacuum to disrupt tour groups and harass the tour guides and the non-Jewish tourists.

"We have learned from complaints of tour guides received by the association that groups of worshipers have a habit of holding noisy mass gatherings near the tomb and in the adjacent rooms. During these gatherings, some of those present speak out loudly, push and shove, and sometimes even prevent visitors from entering,” the guides’ letter of complaint reportedly says.

The haredi and Zionist Orthodox protesters also bring large groups of supporters to block Christian access to the site.

"They are even preventing access to the gravesite. This causes great discomfort, affects the tourists' experience and harms Israel's reputation as a tourism country in general, and Jerusalem's reputation in particular,” the complaint says.

Haredim have also turned the purported gravesite into a quasi yeshiva in order to drive out others who want to visit it.

"The David's Tomb compound is under the responsibility of the Department of Holy Sites (at the Ministry of Religious Services), and the Tour Guide Association's appeal has been handed over to the department by the Tourism Ministry. The Tourism Ministry ascribes a great amount of importance to the issue of granting access to the holy sites to tourists of all religions, and will discuss the issue with the relevant elements,” the Tourism Ministry told Ynet in an official statement.

For its part, Israel Police told Ynet it wasn’t their problem.

“The Western Wall Heritage Foundation has an usher stationed at the gravesite, whose job is to run the compound and maintain its procedures. Nonetheless, the police have set up a station on the nearby Mount Zion, and the officers are always available in case of a suspected criminal offense reported by the usher,” police said.

What police did not say is that the usher’s boss is Rabbi Shmuel Rabinowitz, the same haredi rabbi who controls the Kotel (Western Wall), and who has repeatedly violated Israeli law in order to stop Women of Wall from paying out loud at the Kotel or reading from a Torah scroll there.

Rabinowitz’s ushers and security people attacked male supporters of Women of the Wall several months ago, injuring one of them seriously enough that he had to be taken to a hospital for evaluation and care.

But even though photos and video of the assault exists and was widely publicized on the Internet within minutes of it taking place, Israel Police have not arrested the assailants.

Police did, however, immediately arrest the most seriously injured male supporter of Women of the Wall and attempt to charge him with disturbing the peace.

Handing a Torah scroll to Women of the Wall. Police later allowed the injured man to leave the police station to seek medical treatment as long as he promised to return later in the day to finish being questioned.