"…The boy’s seven-year old brother had been supposed to take care of him, but managed to lose him. The tot’s father had immediately informed the authorities and the police and within a few hours he was returned safe and sound to his parents. This is something that could happen to any parent, unfortunately, and was certainly not an event unique to the haredi community.…" 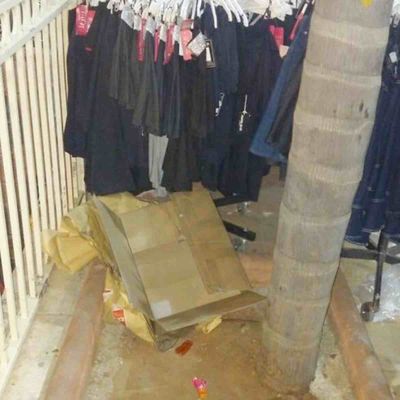 Above and above right: the cardboard box the child was found in

Yisrael Medad is the vice chairman of Israel’s Media Watch, a hard right-wing organization linked to both the right-wing Jewish West Bank settler movement and to hard right-wing activists in Israel proper. Eli Pollack its chairman. Together they write a media watch column for the Jerusalem Post.

In today’s column, Medad and Pollak show their own bias – along with what certainly appears to be a lack of normal concern for the lives of children:

…On March 24, the police in the haredi (ultra-Orthodox) town of Elad discovered a four-year-old boy in a carton in the street.

A microphone always brings out the best in our police officers, especially when it comes to feats of imagination. The police inspector related that they found a boy, in dirty clothes, starved, in a carton. The media had a ball, outdoing each other about the story, as documented on Zinor Layla. Ma’ariv’s headline was “Homeless four-year old from Elad found frightened and disheveled in a carton.” The haredi Kikar Hashabat website ran with “Serious neglect in Elad; a tot has been sleeping for a few days already in a carton.” Even Rino Tzror of Galatz took part in the bash, inviting police officer Ikko Shachar, head of the local police station, to recount the gory details.

Zinor Layla chose not to be lazy and actually sent reporter Ori Even to investigate.

The actual story he found was rather mundane.

The boy’s seven-year old brother had been supposed to take care of him, but managed to lose him. The tot’s father had immediately informed the authorities and the police and within a few hours he was returned safe and sound to his parents. This is something that could happen to any parent, unfortunately, and was certainly not an event unique to the haredi community.

Even interviewed the father, and at the end of the program something very unusual happened: Even apologized. Not once, but a few times. He apologized for the unprofessional behavior of his colleagues.

Aliza Gershon, CEO of the NGO Tsav Pius (which promotes reconciliation between the secular and observant sectors of the populace) showed up at the editorial offices of the program and presented to Guy Lerrer and his staff a special citation for the conciliatory efforts they made, in this instance, to eliminate the badmouthing of haredim.

…[T]he Zinor Layla story is a sad one, and for many reasons. First of all, the non-story about the four-year-old should have never hit the headlines. The police, instead of rushing out with a story, should have first checked the facts and only then gone public, if at all. But no one will take the police to task for this common practice on their part. They do this almost every day, providing journalists with stories which are readily published. The police get instantaneous glory and the journalists a good story without having to work hard.…

The story about the four-year-old is also alarming in the sense that it is an exception to the norm. Journalists are human beings and they may, and will, err. But normal people, when aware of a mistake, apologize without reservations. In our media, it takes courage and perhaps even deserves a prize to point out an error and to apologize.…

In other words, haredi parents allowed a 7-year-old to babysit a 4-year-old without adult hands on supervision. The younger child wandered away and the 7-year-old apparently failed to properly take action.

Because of those things, the 4-year-old wandered away, was lost for an extended period of time in a haredi city where no one – I repeat, no one – noticed him wandering alone, dirty and disheveled.

The child eventually used a cardboard box as shelter and went to sleep in it, and it was there he was found much later, frightened and alone.

Medad and Pollak huff that the media – including the haredi media – smeared the family and the haredi community by blowing up and exaggerating a "mundane" incident that could have happened to any family anywhere in Israel, haredi or not.

Yet it is large haredi families that frequently allow very young children, like that 7-year-old, to babysit much younger siblings. In haredi neighborhoods of Brooklyn it is common to see 7- and 8-year-olds push 2-year-olds to the corner store in a stroller and leave them parked outside while they go inside to buy milk or another staple for their harried or neglectful mother. The same disregard for safety is common in many haredi communities elsewhere, including Israel.

It is never safe to leave a 7-year-old in charge of a 4-year-old, and people who did not study in yeshivas and who do not wear tichels, sheitels, shtreimls and long black suits seem to know this. Even many people who wear knitted kippahs, as Medad once did, seem to know this. But move those knitted kippahs into a right-wing Jewish settlement and suddenly, logic flies out the window.

In many Western countries, the father would have been arrested for child neglect.

But in an Israel controlled by Medad's friends, the reporters who reported the story and the police who told them about it are the evil wrongdoers, while the negligent parent is elevated to near-martyr status. Because of this, children continue to be necessarily put at risk.

4-Year-Old Found Alone, Neglected, Dirty, Malnourished And Sleeping On The Street In A Cardboard Box In The Haredi City Of Elad, Father Arrested.

"…The boy’s seven-year old brother had been supposed to take care of him, but managed to lose him. The tot’s father had immediately informed the authorities and the police and within a few hours he was returned safe and sound to his parents. This is something that could happen to any parent, unfortunately, and was certainly not an event unique to the haredi community.…"