The Darkness Of Haredi Gedolim, Continued

The #2 rabbi of the so-called mainstream Ashkenazi haredi faction, Rabbi Chaim Kanievsky, ruled that the branches of the Temple’s menorah were not curved. Why? Because one rabbi who lived almost 1,000 years after the Temple was destroyed said so.

According to a report on the haredi news website Matzav.com, the #2 rabbi of the so-called mainstream Ashkenazi haredi faction, Rabbi Chaim Kanievsky, ruled that the branches of the Temple’s menorah were not curved.

Instead, Kanievsky insisted they must of have been straight because Rashi, who  lived in France 900 years after the Temple was destroyed, thought they were.

Kanievsky reportedly previously wrote this in his book, Baraisa L’Meleches HaMishkan, on page 28, as well:

“In all the pictures the branches of the menorah are drawn as round, but thus would seem to be a mistake, as Rashi in Chumash has written that the branches were diagonal,” Kanievsky wrote.

The problem is the Kanievsky, now in his very late 80s, is extremely sheltered and has no secular education. He is likely unaware that depictions of the menorah dating to the time the Second Temple stood show the menorah with curved branches as do all other known ancient depictions.

It is only almost 1000 years after the Temple was destroyed by the Romans that Rashi – who lived far away from the Land of Israel – thought the branches were straight.

The Ramabam (Maimonides) who lived in Spain and Egypt just after Rashi, drew a schematic of the menorah with straight branches to show where and how the ornamentation and oil cups were attached. But as anyone can see by looking at his drawing, a menorah built exactly as the schematic looked (and not in the way the schematic was trying to represent) could not be stable standing and some of the oil cups could not hold oil and burn it.

In other words, the Ramabam’s drawing had to be a schematic.

But the late Rebbe of Chabad-Lubavitch Rabbi Menachem Mendel Schneerson insisted that Rambam meant the arms must be straight.

Many Chabad hasidim see Kanievsky’s ignorant ruling as validation of the late rebbe’s position – even though it should be absolutely evident to anyone with architectural or mechanical engineering training that it simply could not be so.

All this really means is that ultra-Orthodoxy of all stripes is slipping further into self-imposed darkness as facts and empirical evidence continue to show that much of what it believes is false.

It is an existential crisis for haredi fundamentalism, and only ignorance and darkness, like that of Kanievsky, will allow that fundamentalism to prevail.

You can find most previous posts on the shape of the menorah here.

The Rambam's schematic. Note there is one oil cup pointing sideways and another two tipped sideways: 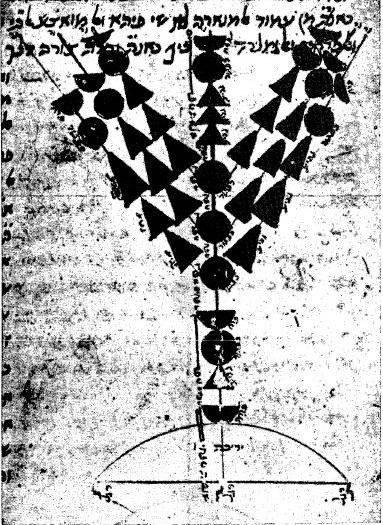 Here is an ancient depiction of the Temple menorah from a Hasmonean (i.e., the Maccabees of Hanukkah fame) coin. The depiction dates to well before the destruction of the Temple by the Romans and was commissioned by the Hasmoneans – who were Temple priests (kohanim) and who personally saw the menorah: 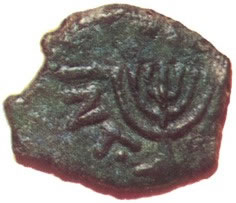 There are hundreds if not thousands of these coins that have been found, and there are also ancient synagogue mosaics and even a menorah carved in the wall of house in the Jewish Quarter of Jerusalem's Old City. The house is located in a neighborhood that was inhabited almost exclusively by Temple priests and their families and dates to well before the destruction of the Temple by the Romans, as well.

All Posts On The Shape Of The Menorah.

The Darkness Of Haredi Gedolim, Continued

The #2 rabbi of the so-called mainstream Ashkenazi haredi faction, Rabbi Chaim Kanievsky, ruled that the branches of the Temple’s menorah were not curved. Why? Because one rabbi who lived almost 1,000 years after the Temple was destroyed said so.