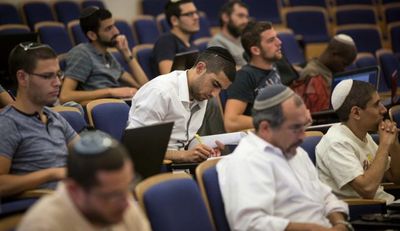 Ha'aretz has a report on a new all-male "haredi" nursing program at the Jerusalem College of Technology. (A similar JCT female-only program has been operating for almost 8 years and is now based in Bnei Brak.)

But the JCT says only half of the program's current students are haredim, and the photo (please see above) Ha'aretz published of the program makes it look as if that number is really closer to 5% haredim than 50%. Most of the students appear to right-wing Zionist Orthodox and the "haredim" appear to be primarily BTs from overseas whose families made aliyah, and those are the backgrounds of the "haredim" Ha'aretz interviewed there.

Why the clear discrepancy?

Because having programs that service "haredim" brings in lots of money, both the from the government and from private donors concerned about Israel's future or about haredi poverty. Having an all-male program that services the right-wing Zionist Orthodox young men that Yitzhar and other radical right-wing West Bank Jewish settlements doesn't or follow right-wing Zionist Orthodox haredi-dati-leumi (haredi-lite) rabbis doesn't.

Will the JCT program one day be filled with actual real Israeli haredim?

But that day will not come as long as haredi rabbinic leaders oppose it and Israeli politicians like Benjamin Netanyahu continue feeding them.

At any rate, here's an excerpt from the Ha'aretz report:

there are the requirements of halakha (Jewish religious law). These are hard to ignore with respect to difficulties that might arise when male nurses are required to care for women, sometimes involving rather personal circumstances. In reality, the staff at the center doesn’t see this as an insurmountable hurdle – and certainly not one that would scuttle the integration of Haredim into the profession.

“Everyone understands that they will have to get clinical experience and care for women, but there is backing for this among interpreters of halakha and rabbis,” says Haya Greenberger, dean of the school’s life and health science department. “Some of our students have already delivered babies in the past – for example, as volunteers for Magen David Adom.”…

For ultra-Orthodox males, however, the academic challenges are immense. Unlike many Haredi women, the men generally lack a high school matriculation certificate, let alone the college entrance psychometric exam. Bringing them up to scratch for higher education requires a year of intensive study just to fill in the gaps.

“While ultra-Orthodox girls graduate with 12 years of education, and some even have a matriculation certificate, the males come to us for preparatory study without a background in secular studies, without math, without even knowing how to read basic English,” says Vardit Markovich, who heads the pre-academic programs. “At first they do a pre-preparatory class, where they study English and math from the basics to the level [usually achieved at the] end of eighth grade. Then they continue to the preparatory course, at the end of which, after a year, they start their studies,” she explains.

Nonetheless, she notes, the students enroll in the program by choice, and work hard. “They may not have studied math and English, but they come from a society with very strong study habits. You need to remember that it’s very difficult, and only 50% of the students who start the preparatory program finish the first year of the degree program,” Markovich says. “It’s even harder because the classes here are in the late afternoon and evening. In the morning, many of the ultra-Orthodox students study at a kollel,” she adds, referring to a yeshiva for married men. “Imagine the desire required from a 28-year-old man who is married with three or more children, starting from scratch to get a degree in software engineering, or a nursing degree. But even those who drop out generally integrate one way or another into the labor market.”…