Dabach, the largest kosher slaughterhouse in Israel, killed about 120,000 animals per year – until yesterday, when Israel’s  Ministry of Agriculture shut down Dabach for the second time in less than five days after further evidence of rampant animal cruelty there was discovered. 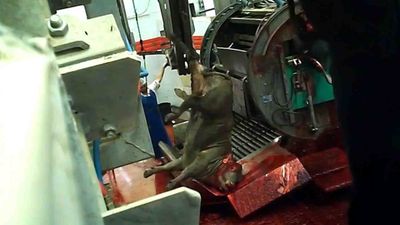 Dabach, the largest kosher slaughterhouse in Israel, killed about 120,000 animals per year – until yesterday, when Israel’s  Ministry of Agriculture shut down Dabach for the second time in less than five days after further evidence of rampant animal cruelty there was discovered, Ha’aretz reported today.

The first closure came on Thursday, but Dabach reportedly worked over the weekend to fix the deficiencies known to the Ministry and was allowed to reopen Sunday. But new findings and additional hidden camera footage was given to the Ministry of Agriculture, and yesterday it ordered Dabach closed until further notice.

Photographs and footage given to Channel 2 News last week by the animal welfare organization Anonymous showed animals trying to get up and walk after they were slaughtered, and also showed workers using electric cattle prods and kicking and beating animals. Animals were beaten and shocked, often for no reason, and were also injured by the plant’s gates and slaughter pen.

Workers also dragged on the ground by their legs and tails and crushed, cut off and maimed tails of animals while they were still fully conscious, and forced animals off trucks in ways that caused animals to slip and fall.

It was also found that the state of maintenance and cleanliness was improper and may cause livestock to unnecessary suffer and the ministry said a report was submitted to it that was not accurate.

Agriculture Minister Uri Ariel, said that "it is impossible to ignore the shocking images that were brought to us…I will have zero tolerance for harm to animals and violations of the Animal Protection Law. I have instructed the professional bodies to take all procedures required following the severe findings discovered there, and I announce that we will increase our enforcement and punishment significantly, and that will make surprise visits in the coming months."

In 2012, Adom Adom, another very large Israeli glatt kosher slaughterhouse, was revealed to have been perpetrating similar animal abuse.

Dabach management said it had fired some of the employees involved in the abuse and had taken other steps to comply with the law. But, it said in a statement, it didn’t think the abuse shown on the videos was sufficiently severe to warrant a long term or permanent shutdown of the slaughterhouse.

"Regarding the findings aired, we believe that they do not justify the cessation of operations of the slaughterhouse and/or the cancellation of the license [for us to operate], and therefore it is subject to a hearing scheduled for tomorrow at the offices of the Veterinary Services. Needless to say, the company is continuing to examine itself and its employees and operates by taking all possible measures to prevent the recurrence of the findings and/or actions broadcast,” the Dabach slaughterhouse said in a statement.

Ashkeanzi haredi Chief Rabbi of Israel David Lau ordered the Chief Rabbinate of Israel to examine the video evidence against Dabach and the conduct of the slaughterhouse.

However, despite frequent examples to the contrary – Dabach, Adom Adom and Agriprocessors are only three large examples out of many, perhaps dozens, over the past decade or so – Lau insisted that "Jewish slaughter is humane slaughter…in accordance with God's commandment to prevent cruelty to animals. There is no justification for the abuse of animals in the slaughterhouse and [we must] prevent such [abuse from recurring there or elsewhere] in the future.”

Over the past 11 years since the Agriprocessors inhumane slaughter scandal first broke, Israel’s Chief Rabbinate has repeatedly promised to crack down on inhumane slaughter and related animal abuse. But it has never really followed through on those promises.

The cattle and sheep mistreated in the Dabach scandal came primarily from Australia. This is not the first time Australian animals have been abused in Israeli slaughterhouses, and Australia is now considering banning all live animal exports to Israel. as a result.

Here is undercover video from Agriprocessors shot 11 years ago. What you see on it is similar to what apparently took place at Dabach. When the Agriprocessors scandal broke, it was the largest glatt kosher slaughterhouse in the world. It retained that title until criminal charges against its VP and day-to-day manager, Chabad Rabbi Sholom Rubashkin, helped cause the slaughterhouse to shut down. It reopened later under the name Agri Star.

Dabach, the largest kosher slaughterhouse in Israel, killed about 120,000 animals per year – until yesterday, when Israel’s  Ministry of Agriculture shut down Dabach for the second time in less than five days after further evidence of rampant animal cruelty there was discovered.