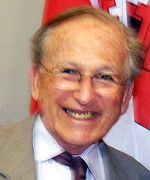 Lord Greville Janner, 86, a former Labor member of parliament and ex-president of the Board of Deputies of British Jews, is accused of more than 20 sex offense committed against residents of children's homes in the 1970s and 1980s.

British prosecutors said on Monday an ageing member of the House of Lords would now face criminal action over accusations of serious historical child sex crimes after they overturned an earlier decision following anger from alleged victims.

Lord Greville Janner, 86, a former Labour member of parliament and ex-president of the Board of Deputies of British Jews, is accused of more than 20 offences on former residents of children's homes in the 1970s and 1980s.

In April, Alison Saunders, Britain's Director of Public Prosecutions said there was evidence to bring charges against Janner, who has always denied any wrongdoing, over 16 allegations of indecent assaults and six other counts.

But she said he was not fit to plead or give evidence because he was suffering from severe dementia and so a trial could not take place.

Britain is holding a wide-ranging inquiry into allegations of abuse by high-profile figures including politicians, several police investigations have begun and critics said the decision added to a perception that the establishment was closing ranks.

Six complainants asked for the matter to be reconsidered using a recently introduced scheme called the Victims' Right to Review, which allows them to have their cases looked at again. That review concluded it was in the public interest for the case to go before the courts.

"I have always said that in my view this was an extremely difficult and borderline case because of the strong arguments on both sides," Saunders said.

Allegations against Janner first arose in 1991 when he was named as having abused a teenage boy during a trial of a children's home manager in Leicestershire, central England, who was jailed for abusing children.

Janner, who was the subject of three investigations between 1991 and 2007, denied the allegations in parliament, but Saunders said both the CPS and police had made mistakes in not acting against him sooner.

"It is a matter of real regret that prosecutions weren’t brought by the police and CPS in the past," Saunders said.

She said the assumption would be that Janner would be found unfit to plead, and thus there would only be a "trial of the facts", with the most likely outcome being an absolute discharge which was neither a punishment nor conviction.

Janner's case has been listed for London's Westminster Magistrates' Court on Aug. 7, and the CPS said it would be for the court to decide whether he should be excused on medical grounds from attending.

Lord Greville Janner, 86, a former Labor member of parliament and ex-president of the Board of Deputies of British Jews, is accused of more than 20 sex offense committed against residents of children's homes in the 1970s and 1980s.