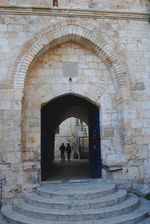 Many Jews may find it distasteful that Christians are given (very restricted) access to pray at King David's purported tomb just outside the Old City of Jerusalem. But the religious status quo and Israeli law allows it. Yet rather than arrest hundreds of haredim who blocked Christian access yesterday, police allowed those haredim to set demands on the Christians, who were not allowed to enter until they agreed.

As I noted yesterday, the building in question is part of the original Hagia Zion, a Byzantine church built in the 4th Century CE after the site came to be identified as the site of the Last Supper and as one of the earliest gathering spots for early Christians.

The first claim that the site is also the burial place of King David was not made until about 800 years later. Writing about 1173 CE, Jewish traveler Benjamin of Tudela claimed the purported tomb of King David had been discovered there during repairs to the church.

Academic scholars and even many Orthodox and some haredi rabbis acknowledge that the purported tomb likely is not actually a tomb and that King David likely is not and was not buried there.

But facts obviously do not matter to Israel's woebegone police force or to the haredim they coddle. Ha'aretz reports:

…The Jews holed themselves up in the complex for a long period until police and Border Police removed them by force, so as to maintain the status quo at the site and allow the Christians to commemorate the holiday. Police also used force against journalists at the scene.

In negotiations that preceded their eviction, Jewish worshippers on the premises – including Rabbi Shalom Arush, head of the Kiseh Rahamim yeshiva, from the Bratslav Hasidic sect – presented a series of conditions for allowing the Christian service there. The terms were conveyed to the Greek Orthodox worshippers via the police.

In response to the arrival of the Greek Orthodox group on Monday, Rabbi Yosef Berger, who presented himself as one of the "rabbis of the tomb," told the police, “Here at David’s tomb, [people] will not enter with a cross. It’s idol worship,” he said, and "an abomination."

In addition, before the incident, a group of Jews dedicated to what they called “saving King David’s tomb” had called on members of the public to come to the site to prevent “idol worship” there.

On Sunday, a group of Jews unsuccessfully sought to disrupt a small procession of Armenian Orthodox worshippers in the Old City, but police also intervened. In the afternoon, Greek Orthodox Christians began praying, under the watchful eye of security forces.

The official arrangements at the site, established by Israel's Interior Ministry, allow Greek Orthodox visitors, unlike the Catholic and Armenian worshipers, access not only to the upper chamber but also to the lower one, which Jewish tradition says is the site of King David’s tomb. The lower level is used by Jewish worshippers throughout the year.…

Last Sunday (May 24), when crowds of Jews marked Shavuot in the Old City, was also the date on which the Catholic Church marked the Pentecost. The Catholic media reported that some Jewish individuals shouted curses at the Christian worshipers, and the two groups had to be separated by Israeli police.

Custodian of the Holy Land, which oversees Christian holy sites in Israel for the Vatican, issued a statement in response to the incident, which read "these are ceremonies that occur every year, commemorating Christian holidays, and for hundreds of years have been part of the status quo in the area. In recent days, extremists have been trying to sabotage these ceremonies by using violence against worshippers. We find these events very troubling, and call on the state of Israel and the police to continue using all methods necessary in order to allow for prayer serves to be held, as they have been for hundreds of years."…

Haredim, Others Try To Keep Christians Away From King David's Purported Tomb.

Many Jews may find it distasteful that Christians are given (very restricted) access to pray at King David's purported tomb just outside the Old City of Jerusalem. But the religious status quo and Israeli law allows it. Yet rather than arrest hundreds of haredim who blocked Christian access yesterday, police allowed those haredim to set demands on the Christians, who were not allowed to enter until they agreed.