You would think that Satmar hasidic PR hack Yossi Gestetner – who also founded and leads OJPAC, the supposed Orthodox Jewish Public Affairs Committee in neighboring Rockland County – would condemn that type of hate-mongering and calling political opponents Nazis, especially because he lost his job with the New York State Republican Party several years ago in part because he himself did the same thing, and was outed for it by FailedMessiah.com.

But Yossi Gestetner never changes his stripes, and instead of condemning the comparison of Brabenec to Hitler and Pharaoh, he merely says what's going on in Rockland County is the same.

Gestetner Tweeted twice in response to the Satmar Headquarters Tweet:

"@ShimonRol @HQSatmar @KarlBrabenec It is very concerning that people, who lose elections, run to Albany to change State laws for individual"

Note there is no condemnation from Gestetner at all. In his mind, calling opponents "Hitler" or the two biblical archenemies of the Jewish people, "Pharaoh" and "Haman," is perfectly fine.

Here are screenshots of the Satmar Headquarters Twitter post and the responses to it, including two from Gestetner. 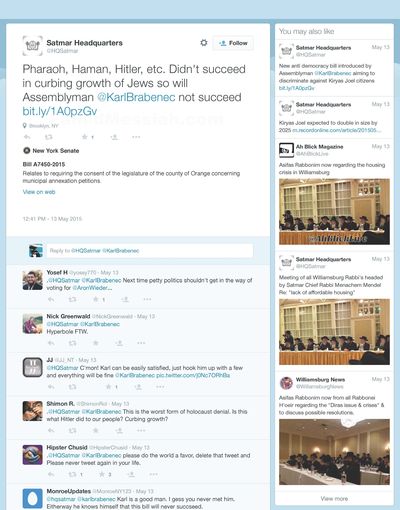 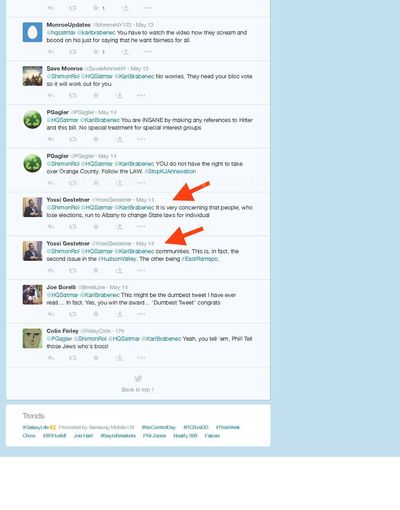 Out Of The Mouths Of Haredi PR Flacks – The Lies And Unethical Behavior Of Yossi Gestetner.