The ban on women driving and the threat to expel all children of mothers who violate it from Belz hasidic schools in London, England published here last week became big news in England today, with British media comparing the hasidic sect to Saudi Arabia.

Some of you will remember that the New York Times chose not to credit FailedMessiah.com, The Jewish and other news sources, including the Forward, for its supposedly groundbreaking repoting on child sex abuse in haredi Brooklyn. The paper's public editor (ombudsman) chastised Times editors for that once he was shown the proof supporting our claims against the paper.

The borrowing from FailedMessiah.com and other sources was no error. One of the Times' journalists who did it told me before the Times' first report in that series was published that the Times had chosen to do this, to take my reporting here and Hella Winston's reporting in the Jewish Week (and, it turned out bits of reporting by The Guardian, the Forward, PIX 11 News and others) without giving any of us credit – a willful violation of professional ethics.

A similar case happened with the iconic photo of Hillary Clinton in the White House Situation Room with President Obama and others during the Bin Laden raid. She was photoshopped out of the picture by a Satmar-linked Yiddish newspaper.

And then we have papers like, for example (just to name two), the Jerusalem Post and Ha'aretz, which regularly publish stories they've culled from Kikar HaShabbat, Behadrei Haredim, Failed Messiah and others. Even when these papers do cite sources, they don't link to them, so a reader who wants to see the original report from the original source has to go and hunt for it, which is not always easy to do. That's also unethical in Internet terms, but papers like the Post and Ha'aretz and so many others do not seem to care. (The New York Times, interestingly, does regularly link to publications it cites.)

Why go through all this?

Because last week I published a new letter from Belz in London reiterating an older ban on women driving automobiles. It laid out punishments for women who fail to obey, including expelling their children from all Belz schools.

The JC (formerly known as the London Jewish Chronicle) did its own story on that ban today, which was picked up by a series of London-based newspapers.

The JC almost never credits blogs or news websites for the stories it takes from them, and the Belz driving ban is no exception. The JC fails to mention mention that the story it printed today was broken in Hebrew by Behadrei Haredim and in English after that by FailedMessiah.com a week ago.

Here's the JC story in full:

The British leaders of a major Chasidic sect have declared that women should not be allowed to drive.
In a letter sent out last week, Belz rabbis said that having female drivers goes against “the traditional rules of modesty in our camp” and against the norms of Chasidic institutions.

It added that, from August, children would be barred from their schools if their mothers drove them there.

According to the letter — which was signed by leaders from Belz educational institutions and endorsed by the group’s rabbis — there has been an increased incidence of “mothers of pupils who have started to drive” which has led to “great resentment among parents of pupils of our institutions”.

They said that the Belzer Rebbe in Israel, Rabbi Yissachar Dov Rokeach, has advised them to introduce a policy of not allowing pupils to come to their schools if their mothers drive.

Dina Brawer, UK Ambassador of the Jewish Orthodox Feminist Alliance, said that “the instinct behind such a draconian ban is one of power and control, of men over women. In this sense it is no different from the driving ban on women in Saudi Arabia. That it masquerades as a halachic imperative is shameful and disturbing.”

While many Chasidic women do not drive, this is thought to be the first formal declaration against the practice in the UK.

“It’s always been regarded in Chasidic circles as not the done thing for a lady to drive,” one rabbi observed.”
But although some Chasidic sects discourage women from driving, others such as Lubavitch have no such policy. The wives of some senior non-Chasidic strictly Orthodox rabbis drive.

One local woman said that the policy “disables women. The more kids they have, the more they need to drive.” But she believed that some women would take no notice of the policy. “They say one thing, they do another,” she said.

The Belz, who originated in Ukraine in the early 18th century, are one of the most prominent Chasidic sects and re-established their headquarters in Israel after the war. When the Belzer Rebbe celebrated the wedding of a grandson in Israel two years ago, some 25,000 guests attended.

Compared with some of the most conservative Chasidic sects, Belz are seen as relatively moderate and while some Charedi schools in London have struggled with inspections, both their main boys and girls schools, Talmud Torah Machzikei Hadass and Beis Malka, are rated “good” by Ofsted.

Inspectors at Machzikei Hadass noted last year that there was a “very effective British values policy, and display throughout the school demonstrates the high priority that the school puts into this important area”.

Here's my post dated May 19, 2015. Note full credit was given to the original source, Behadrei Haredim and a link was provided:

The letter said that “because the incidents of mothers of male and female students” in Belz hasidic schools “driving cars has recently multiplied - contrary to the rules of religious modesty in our camp and [contrary to the] etiquette [and] respect parents [are expected to have for all] hasidic institutions, including Belz institutions in particular,” mothers who continue to drive cars will be punished by having their children expelled from school.

The letter also says local rabbinic leaders asked the Belzer Rebbe what to do about this situation and he agreed both with the ban on women driving and with the punishment suggested for breaking it.

"Therefore, we wish to announce that from Rosh Chodesh Elul 5775 [i.e., August 16, 2015 on the Gregorian calendar], not one male or female student will be allowed to study our institutions if his mother is driving a car. But someone who has no other option [but to drive] – and this [need] may only be for medical reasons – must apply for the special committee [set up] for this purpose, and the committee discuss [the driving ban’s] application [to that particular case],” the letter, which was singed by the entire Belz rabbinic leadership in London, continues. 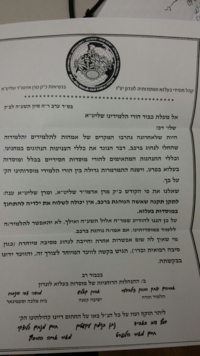 Of the British papers who picked up the JC's dishonest report, at least one credits The JC, but another, ITV, credits unnamed "Jewish websites."

The JC's editor will tell you he and his paper are ethical and hold to the highest standards of the profession – all the evidence to the contrary, of course, be damned.

The ban on women driving and the threat to expel all children of mothers who violate it from Belz hasidic schools in London, England published here last week became big news in England today, with British media comparing the hasidic sect to Saudi Arabia.