« Sydney Chabad To Be Sued By City Over More Than $10,000 In Unpaid Garbage Collection Fees | Main | Top Haredi Rabbi Orders Charities To Trash Food Meant For The Poor »

Is The Lakewood Letter Fake?

Rabbi Aharon Kotler, the executive director of Beth Medrash Govoha (better known worldwide as Lakewood Yeshiva) claims a letter calling for mechitzahs – in this case, curtains – to separate the genders on publicly-subsidized buses is a fake – but is it? 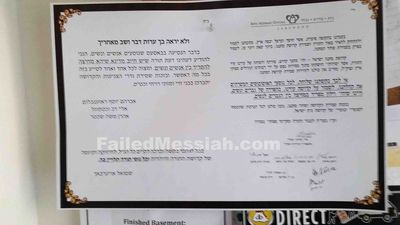 Rabbi Aharon Kotler, the executive director of Beth Medrash Govoha (better known worldwide as Lakewood Yeshiva) told Behadrei Haredim a letter calling for mechitzahs – in this case, curtains – to separate the genders on publicly-subsidized buses is a fake.

Kotler claimed the letter was distributed in haredi synagogues in Lakewood “by the fanatics, who with chutzpah faked it.”

"This letter is an unequivocal fake,” Kotler continued. [We] never signed such a letter, [even though it] is indeed distributed everywhere… [in] town - but we have no connection to it. What happened was there is a busline from Lakewood to Monsey and Lakewood to Brooklyn, and extremist groups want to promote [gender] separation and the hanging of a mechitzah-curtain on this line, which is generally hasidic, but not here in Lakewood.…And the fanatics probably committed this brazen act and forged the letter. There was already an attempt to fake this before…[and] every sensible person can see that it is not true. The letter was distributed in synagogues in Lakewood, [but is] not [posted in Lakewood Yeshiva]. Here in the study hall there are ways that the public can know what opinions [our rabbinic] leaders have.”

But even though Kotler told Behadrei Haredim the  letter is fake, Kotler also said the yeshiva had no intention of issuing an official written statement saying so. Kotler claimed issuing such an official statement is “not something important enough” to issue because the process would “disturb” Lakewood Yeshiva’s top rabbis, who are otherwise busy with Torah study.

Behadrei Haredim’s report makes clear that even by Kotler’s own admission, the letter is still as of today widely posted in Lakewood haredi synagogues and in other locations frequented by haredim in the city.

Yet first reports of the letter were published – including by FailedMessiah.com – five days ago, on May 22.

And that is hard to imagine.

Lakewood is essentially a company town and Lakewood Yeshiva – the largest yeshiva in the world outside Israel – essentially its main employer, and the town is run almost as a subsidiary of the yeshiva. The town’s top haredi rabbis all work for the yeshiva or are closely linked to it, and most of the local haredi synagogue rabbis are, as well.

Would they post a letter that is supposedly so obviously fake? Would they do so not once but twice?

So why the quasi-denial from Kotler?

Almost certainly because the buses, both the recently started local bus line and the intercity routes Kotler spoke about are publicly funded, and any actual gender segregation on them or even attempts to gender segregate them through things like that letter would be cause for the public funding bodies to end that public funding. Arguably, they would be mandated by law to do so.

Is The Lakewood Letter Fake?

Rabbi Aharon Kotler, the executive director of Beth Medrash Govoha (better known worldwide as Lakewood Yeshiva) claims a letter calling for mechitzahs – in this case, curtains – to separate the genders on publicly-subsidized buses is a fake – but is it?