Does She Really Want Tea? 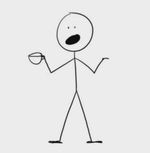 A great new video short explains what consent is in a way pretty much everyone can understand.

By way of warning, the "F" word is used a couple times at the very beginning of the video in the first few seconds, as in "Would you like a cup of tea?" [Reply:] "…F@*k, yes!"

Sexual acts are never mentioned. (Although having sex is mentioned once during the first five seconds of the video.)

The video – which is on one level very, very funny – also teaches an important lesson (that appears to aimed directly at, among many others, Bill Cosby). And for haredim dabbling with escaping into the outside world who get no sex education at home and who only know the outside world from the caricature of it taught them by their rabbis, this could be a very important lesson to learn.

The video is all stick figures, so for those of you concerned about what your eyes see, there's nothing to worry about here.

Does she really want a cup of tea? Find out in this extremely brief, well done video. It runs less than three minutes:

Tea and Consent from Blue Seat Studios on Vimeo.

Does She Really Want Tea?

A great new video short explains what consent is in a way pretty much everyone can understand.