Did Moses Really Write The Torah? 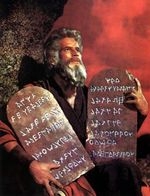 Did Moses really write the Torah? And if he didn't, why is it that we attribute its authorship to him nonetheless? Could the whole thing be nothing more than a rabbinical error, a misreading of the biblical text by rabbis who erred because they did not know the history?

Above: a painting depicting Charlton Heston playing Moses in the film The Ten Commandments. The shape of the luchot (tablets) is wrong – they should be cubes; the rounded shape has to do with Roman architectural preferences and entered Judaism during the Roman period – but the ancient Hebrew-Canaanite script is the script that would have been on the tablets if the biblical story is true.

Ha'aretz's Elon Gilad has a clearly written article explaining two points of interest that are especially relevant today, the day before the beginning of the Shavuot holiday. Shavuot, of course, begins Saturday night and celebrates both the spring harves and the purported anniversary of the giving of "the Torah" to Moses by God on Mount Sinai just over 3,300 years ago.

But who actually wrote or compiled the book we know today as "The Torah" or "The Torah of Moses"? And perhaps more interestingly for many FailedMessiah.com readers, why do we attribute its writing to Moses?

Gilad answers both questions. Everything in square brackets [ ] are my added clarifications]:

…[W]hen Moses was alive, the Canaanites still controlled the Holy Land. So the verse ending with “And the Canaanite was then in the land” (Genesis 12:6) ostensibly could not have been written by Moses, but [must have been written] by someone who lived after the Israelites took over Canaan, that is, after Moses died.

In his commentary on this verse, Ibn Ezra [born in 1089 CE; died in about 1167 CE] wrote, “It [the verse] holds a secret of which the wise man should be silent” (he doesn't tell us what the secret is, but it may be that Moses seems not to have written all of the Torah). [That is, in fact, how the vast majority of Modern Orthodox academic scholars understand Ibn Ezra today.]

Indeed scholars remained silent on the topic for centuries, until in the 17th century, Baruch Spinoza read Ibn Ezra’s commentary – and could remain silent no more. In his Theological-Political Treatise (1670), Spinoza elaborated on the topic and concluded that Moses could not possibly have written the entire Pentateuch. His English contemporary Thomas Hobbes came to the same conclusions, without Ibn Ezra's help.

A century later, a French professor of medicine named Jean Astruc set out to prove the two heretics wrong, using the newly- emerging science of textual criticism. With the help of techniques that had, up to then, been applied only to Latin and Greek classics, he studied the Torah and came to the conclusion that Moses compiled the Book of Genesis by putting together two older texts. He published these findings anonymously in 1753.

Using similar techniques, in 1805 Wilhelm Martin Leberecht de Wette, a German Bible scholar, published a study arguing that Deuteronomy had been written by a different author or authors from the rest of the Torah.

Half a century later, in 1853, Hermann Hupfeld, an Oriental studies scholar, showed that what Astruc identified as two sources was apparently three.

All these studies were consolidated towards the end of the 19th century by Julius Wellhausen, another German biblical scholar. His coherent theory is, with some alterations, the consensus view of the Torah’s authorship, which is accepted by an overwhelming majority of Bible scholars today.

The different parts of the Torah were written by priests and scribes in the northern kingdom of Israel and the southern kingdom of Judah during the First Temple period and the Babylonian Exile (9th to 6th centuries BCE) [Almost all of them date to after the purported reigns of David and Solomon, many more than 100 years after]. These parts were stitched together by Ezra the Scribe [sometime during the years 458 BCE to 440 BCE] to create a single historic narrative and legal code for the returning exiles. (Ezra was the priest appointed by the Persian overlords to lead the Jews in Judea.)

Judea at the time was a province of Persia, which ruled that the Holy Land should be administered by the rules and laws stated in this authoritative collection compiled by Ezra. The Second Temple officials concurred.

So it seems that Moses did not write the book after all. The reason Jews came to think so nonetheless was the outcome of two historical processes during the Second Temple period.

The first change was conceptual: Ancient societies had a different grasp of books than we do.

We place emphasis on authors and exhibit their names on the front cover. Not so in ancient Babylon and Egypt: Most books had no specific author. They were created by successive generations of scribes and their authority drew from their antiquity, not from the supposed writer.

It was only once Judea fell under Greek culture that a book market began to develop and the author began to be of importance. The first Hebrew book to state clearly who its author was is the Wisdom of Sirach, written in the beginning of the second century BCE by a Jewish scribe named Ben Sira, well after the Greek conquest.

Thus an identity for the writer of the Pentateuch became sought. But how did the misunderstanding that it was Moses arose? That brings us to the second change – a semantic one.

Everywhere in the bible where it says "hatorah" – it means "the law." There is one exception, in the Book of Nehemiah, where he mentions "hatorah" – referring to the Pentateuch: “And Ezra the priest brought the Torah before the congregation both of men and women, and all that could hear with understanding, upon the first day of the seventh month” (Nehemiah 8:2).

Posted at 10:43 AM in History, Religion, Religion & State, Skepticism | Permalink

Did Moses Really Write The Torah?

Did Moses really write the Torah? And if he didn't, why is it that we attribute its authorship to him nonetheless? Could the whole thing be nothing more than a rabbinical error, a misreading of the biblical text by rabbis who erred because they did not know the history?