The Yahrtzeit Of A Rabbinic 'Heretic' 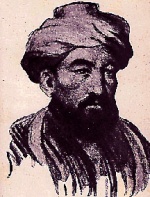 “The Law [i.e., the Torah] cannot prevent us from considering to be true that which our reason urges us to believe.”

The Yahrtzeit Of A Rabbinic 'Heretic'
Shmarya Rosenberg • FailedMessiah.com

Ha’aretz reports that Monday was the yahrtziet of Rabbi Levi ben Gershon, known more commonly in rabbinic sources as the Ralbag or Gershonides, who died on April 20, 1344. The Ralbag – who lived his life in the the Provencal towns of Avignon and Orange in what is today Southern France – was a talmudist, philosopher, mathematician and astronomer who had good relations with the Pope, who was then based in Avignon. (In fact, one of his books is dedicated to Pope Clement VI.)

The Ralbag is thought to have made his living as a physician. (In those days, many top rabbis earned their livings outside the rabbinate; today the rabbinate is a career and, in Israel, is full of nepotistic appointments and make-work jobs.)

The Ralbag tried to reconcile the thought of the ancient Greek philosopher Aristotle with traditional Jewish thought. But when that wasn’t possible to do, the Ralbag did what the Maimonides had done before him: he gave preference to Aristotle when Aristotle’s outlook matched with current science.

In his Sefer Milhamot Hashem (The Book of the Wars of God), the Ralbag wrote, “The Law [i.e., the Torah] cannot prevent us from considering to be true that which our reason urges us to believe.”

He also argued that God did not create the universe ex nihilo (out of nothing). Instead, he argued that God created it out of preexisting disorganized matter. The very creation itself was based on the humans having free will, he insisted. Therefore, God does not know in advance what a person’s fate will be, he just knows what the potential choices are.

If he lived today, the Ralbag would be considered a heretic by most haredi rabbinic leaders. (Even during his lifetime, his book was was derisively referred to as "The Book of the Wars Against God" by some rabbinic opponents.)

Instead, he is most often viewed by them as someone who was a great rabbi but who adopted views that are wrong or that we are not “big enough” today to hold or study – a way of pushing his rabbinical writings out of the yeshiva mainstream without having to call him heretic.

The Yahrtzeit Of A Rabbinic 'Heretic'

“The Law [i.e., the Torah] cannot prevent us from considering to be true that which our reason urges us to believe.”