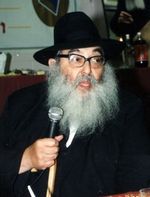 "We, the family of Rabbi Yitzchok Dovid Groner OBM, are very sorry for what has occurred to those who were the victims of sexual abuse while they attended the Yeshivah Centre Melbourne when our father was the senior Rabbi.…"

All I'll say is that Rabbi Yitzchok Dovid Groner showed no concern for the victims while he was alive. He knew many of them weren't doing well, and he knew his decisions allowed abusers to roam Chabad Yeshivah Centre's halls, classrooms, mikvah and synagogue freely. But Rabbi Yitzchok Dovid Groner took no action of note to protect children or help victims – or even to apologize.

If Groner were alive and would apologize now, I think he would do so only to try to stave off further legal action – not because he was really admitting his own and Chabad's failings and the damage those failings caused children.

And what about Groner's son-in-law Rabbi Tzvi Hirsh Telsner? Telsner was awful to abuse victims and their supporters, clearly encouraged the harassment and shunning of them and did absolutely nothing of value to protect any of them. Wouldn't calling for their brother-in-law/husband to resign from all leadership roles in Chabad be the right thing to do? Of course it would, but Groner's children didn't do that. They didn't even say that what Telsner did is wrong – and that speaks volumes about the sincerity (or lack thereof) of their apology.

To the victims of sexual abuse at the Yeshivah Centre Melbourne

We, the family of Rabbi Yitzchok Dovid Groner OBM, are very sorry for what has occurred to those who were the victims of sexual abuse while they attended the Yeshivah Centre Melbourne when our father was the senior Rabbi.

Rabbi Groner is no longer alive to speak for himself and we cannot speak on his behalf. However, knowing him as we do, we believe that it would have broken his heart to the core to listen to the victims' testimonies and hear their cries of the wrong done to them while he was the senior Rabbi at the Centre. We feel that he would have sincerely and remorsefully asked for forgiveness from the victims.

Therefore, we his children wish to reach out to you and offer a genuine, heartfelt and unreserved apology for the harm caused to you while you were children attending the Yeshivah Centre.  We deeply regret the failure to protect you from sexual abuse while our father was the senior Rabbi at the Yeshivah Centre.

We acknowledge and admire the strength of those who came forward to speak about their experience.  We, the children of Rabbi Groner, now have a much deeper understanding about the impact of sexual abuse on the victims and we are committed to doing what we can to prevent a repeat of the wrongs of the past.

May G-d bless all of you and grant you much healing and peace.

The children of Rabbi Groner residing in Australia

Chabad’s Top Australian Rabbi Tells Child Sex Abuse Victim He Was Wrong To Call Police Without Getting Permission From Rabbis.

How Serious Is Chabad's Claim To Want To Help Its Victims Of Child Sex Abuse? Not Very, Emails Reveal.

An Open Letter To Chabad's Yeshivah Centre Board And Committee Of Management From 11 Survivors Of Child Sex Abuse Calls For All Leaders To Resign Immediately.

"We, the family of Rabbi Yitzchok Dovid Groner OBM, are very sorry for what has occurred to those who were the victims of sexual abuse while they attended the Yeshivah Centre Melbourne when our father was the senior Rabbi.…"