« Chabad Housing Development Warns It Will Refuse To Sell To "Not Tznius" People | Main | Yeshiva Of Hasidic “Expert” On Medical Halakha Had Stairs That Did Not Conform To Building And Safety Codes, Leading To Deaths And Critical Injuries »

"The following might be painful for some to read. Silence, however, is not an option.. Some may label this op-ed “anti-Charedi” or “typical self-hating Jew drivel” – but it is not. This is not directed at any sect of Orthodox Jews in any way.…" 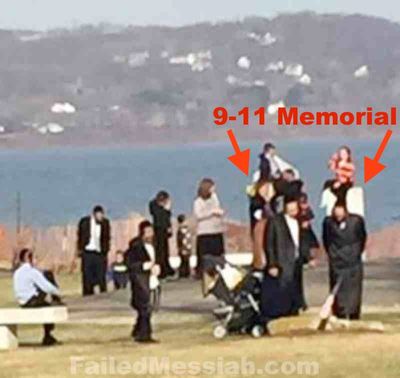 The following might be painful for some to read. Silence, however, is not an option.

Some may label this op-ed “anti-Charedi” or “typical self-hating Jew drivel” – but it is not. This is not directed at any sect of Orthodox Jews in any way.

What this writer has personally witnessed in the past two days of Chol Hamoed is enough reason to take pen to paper.

On Chol Hamoed, when just about every single family goes on trips to relax and enjoy the Yom Tov, we are watched very closely. We visit amusement parks, museums, malls, parks, airports, tourist locations, concerts, plays, shows, and anything else we can think of. Not only are they watching us closer, but this week – there is even greater exposure of our behavior. How so? There is no public school on account of Easter vacation. Consequently, there are thousands of other ordinary Americans at the same attractions that we attend.

We are being VERY closely watched.

On the second day of Yom Tov, we read in the Torah about Chillul Hashem. Perhaps it was done so we can fully understand how to prepare ourselves and our families for Chol hamoed. So that when we go out in the public en mass, we can make a Kiddush Hashem, and not chas veshalom the opposite.

Most of us make a Kiddush Hashem. Our families are well behaved. We follow rules. We don’t litter. But the sheer numbers of Charedi folk who cause a Chillul Hashem is MUCH too much to bear.

Chillul Hashem is a sin that YOM KIPPUR does not forgive.

On the first day of Chol Hamoed, this writer witnessed a Charedi woman with her husband and family in a NYC subway station. A fare was paid for the mother to push her baby carriage through. Along with her carriage, however, went through FIVE others – all without meeting the fare requirement.

Later that day, this writer witnessed three Charedi children in South Street Seaport in Lower Manhattan tossing empty Kosher box drink containers into the East River. The parents sat on a nearby bench as this behavior continued for 15 minutes. With the river littered with chocolate bar wrappers, empty snack bag wrappers etc., not one – not two – but THREE non-Jewish passersby told the parents to have their children stop this behavior.

On the second day of Chol hamoed, this writer witnessed a Charedi father pull his child’s pants down on a major street and allow his child to relieve himself on a public sidewalk. Later that day, this writer witnessed a Charedi woman walk her child to the front of a line in a popular amusement park, and simply cut the entire line of more than 50 people patiently waiting for their turn.

After this writer confronted her and told her respectfully that approximately 45 of the 50 people on line were not Jewish and she caused a massive Chillul hashem, her Charedi husband reprimanded this writer and told him not to give other people “Musar”, and “mind his own business.”

On Tuesday evening, Ed Day, the Rockland County Executive posted on his Facebook page a photo of a Charedi family at the Haverstraw Bay Park. In the photo [please see above and here – FM], one can see a Charedi family standing around while a child is sitting on top of the Ramapo 9/11 Memorial. The Supervisor said the point of the religious makeup of the family, or their ethnicity didn’t matter.…

One Jewish community activist tweeted “It is ironic that @ElectEdDay is using 9/11 memorial to incite & divide. It seems Mr. Day is the one disrespecting 9/11 here. Tragic indeed.”

Some of those posts are absolutely horrifying. Of course, our knee-jerk response to all this is, “Oh, they are a bunch of anti-Semites.”

It is high time for us to wake up and do some serious introspection.

When a prominent community figure calls the FDNY “Nazis” at last year’s Sereifas Chometz, this will not correct the problem. Was a proper apology ever made? Or do people now firmly believe that it’s okay to label heroes who risk their lives every day to protect us “Nazis.”

Perhaps it is time for our leaders to have a closer look at the social media to see how closely we are being watched. The time has come to pull our heads out of the sand and start educating our children as to how to act like a Jew.

We wear Yarmulkas on our head. That means “Yarei Malka.” It is time to live up to that designation and realize that the symbolism is more than just a piece of cloth. We wear Tzitsis to remind us of the 613 Mitzvos. It’s time to start fulfilling the greatest one of those 613 Mitzvos – making Kiddush Hashem, not a Chillul Hashem.

So before we venture out today and tomorrow, perhaps we should review some of the basics. Firstly, we should be extremely cognizant of what constitutes Chilul Hashem and Kiddush Hashem. Secondly, we should avoid selfish behaviors and attempt to be as altruistic as possible.

"The following might be painful for some to read. Silence, however, is not an option.. Some may label this op-ed “anti-Charedi” or “typical self-hating Jew drivel” – but it is not. This is not directed at any sect of Orthodox Jews in any way.…"