County Executive Steve Neuhaus issued a statement before the hearing calling on Kiryas Joel to reschedule it for the safety of the public. Kiryas Joel’s leaders ignored him. 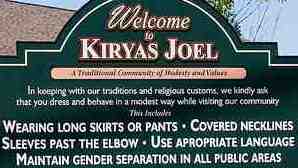 The Satmar hasidic Village of Kiryas Joel was named lead agency for the most recent attempt to annex land from the adjoining Town of Monroe – a move that angered many non-hasidic locals who noted Kiryas Joel's repeated bad behavior and lack of concern for its neighbors.

Kiryas Joel’s first public move after being named lead agency was to hold a public hearing Tuesday night on the annexation in the middle of a large dangerous snowstorm, making it nearly impossible for many people from outside the village to attend.

Activists from Monroe asked Kiryas Joel to reschedule the hearing due to the snow, sleet and freezing rain. Kiryas Joel refused – despite state-issued travel warnings.

Kiryas Joel’s Mayor Abraham Wieder reportedly said the hearing - known as a scoping session - was voluntary and noted that written comments could be submitted until March 10.

According to the Times Herald-Record, only about 70 people attended the hearing. About 300 attended a similar hearing at the same location in September.

County Executive Steve Neuhaus reportedly told the paper before last night’s hearing that the county will conduct a "parallel review" using its own attorneys, planners and engineers to make sure the environmental and related issues are actually dealt with. Neuhaus also issued a statement before the hearing calling on it to be rescheduled for the public's safety. Kiryas Joel’s leaders ignored him.

Most citizens who spoke at the hearing opposed the annexation and expressed concerns about its environmental impact, what it would do to change the semi-rural ambiance of the area, and the increased burden to the county in social services that would have to be paid out to an expanding Kiryas Joel’s residents.

In contrast to its neighbors and adjoining Monroe, which have low density suburban housing, Kiryas Joel has extremely high density housing. It is also the poorest community in the entire country, with more welfare, food stamps and other government social service spending per capita than anywhere else in the United States.

County Executive Steve Neuhaus issued a statement before the hearing calling on Kiryas Joel to reschedule it for the safety of the public. Kiryas Joel’s leaders ignored him.