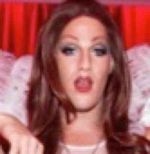 “Being a drag queen frees you up to say whatever the f#*k you want.”

This March, one of New York’s up-and-coming drag queens, Lady SinAGAGA, made her debut at the historic Stonewall Inn. She began the night in an elegant silk robe, then took it off to reveal a rather sexy bodysuit coupled with knee-high boots. The crowd cheered for her as she sang her soulful rendition of Out Tonight from Rent, her favorite musical.

Lady SinAGAGA, as you may have guessed, is a Jewish drag queen (in case you missed it: SinAGAGA sounds like synagogue). Her real-life alter ego, Moshiel, 22, was raised Orthodox and came out just over a year ago. He grew up attending Jewish day schools on Long Island, and spent two years studying at a Jerusalem yeshiva, a religious school, before he started at the School of Visual Arts.

Lady SinAGAGA is relatively new on the Jewish drag scene, having only debuted at a High Homo Days party (a Jewish gay party hosted by Hebro, an organization working to celebrate the gay Jewish community).

Jewish drag is an entirely new manifestation of the cultural phenomenon; the men who do it have come out and base large parts, if not all, of their drag personas on their Jewish upbringing.

As a new performer on the scene, Lady SinAGAGA was nervous, so she reached out to Silvia Sparklestein for advice – and some makeup.…

Posted at 03:31 PM in Haredim, Homophobia and its Discontents, MO & Chardal | Permalink

“Being a drag queen frees you up to say whatever the f#*k you want.”