« Controversial Comedian Sarah Silverman Gets Out Vote For Left-Wing Meretz Party | Main | Was This The Work Of The Alleged "Prodfather" Rabbi Mendel Epstein, Rabbi Martin Wolmark And Rabbi Yisroel Belsky? »

“We wrote to the governor, the attorney general, the mayor and the chancellor. I do that periodically…and this is the first time I’ve never gotten a single response." 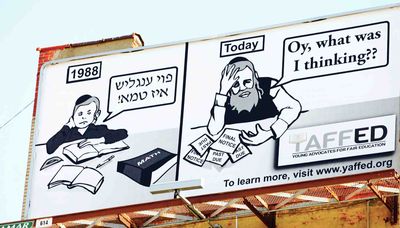 This is illegal almost everywhere, including New York State. But New York State, New York City and counties like Rockland where high numbers of haredim live refuse to enforce the law and thereby become complicit in what is essentially a form of child abuse.

“We wrote to the governor, the attorney general, the mayor and the chancellor. I do that periodically…and this is the first time I’ve never gotten a single response,” said Siegel, who was director of the New York Civil Liberties Union from 1985 through 2000.

State officials didn’t respond to multiple emails from The Jewish Week asking for comment. Department of Education officials reiterated what they told The Jewish Week in December: that they needed complaints about a specific school before they could investigate. They didn’t address why they haven’t responded to Siegel’s request for a meeting, or respond to a question as to whether they would investigate should Siegal name specific schools, something Siegel said he expected to do at a meeting, but didn’t want to broadcast in a public letter.

“The only thing I can conclude at this point is that this is a radioactive issue” he said, that “none of them necessarily wants to touch.”

“It’s known that this is a community that very often votes monolithically,” he said. “All this just gets me very angry, because that’s not the way it should be. It should be that elected officials look at these issues on the merits and if there’s a problem here they should do something. They’re legally obligated to do something. Then you have to figure out how to hold them accountable.”…

While Yaffed awaits a response from the government, it is looking for parents of current students and current teachers to serve as plaintiffs for the lawsuit — not a small order in the insular charedi communities of Crown Heights, Williamsburg and Borough Park where doing so could lead to retaliation or social ostracism.…

“We wrote to the governor, the attorney general, the mayor and the chancellor. I do that periodically…and this is the first time I’ve never gotten a single response."