« Horrific: Seven Haredi Children Killed In Brooklyn Home Fire Sparked By Shabbat Hot Plate; Lack Of Smoke Alarms Likely Contributed To Deaths | Main | Video: Jeffrey Goldberg, Ari Shavit, And Other Experts Talk About The Israeli Election And Israel's Deteriorating Relationships With The US And The West » 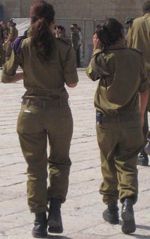 The IDF closed a mess hall to women and blocked a female officer who tried to enter, all because new recruits the IDF has designated as haredi were inside eating.

IDF Bars Female Officer From Mess Hall Where New ‘Haredi’ Recruits – Most of Whom Were Not Actually Haredi Or Even Orthodox – Were Eating
Shmarya Rosenberg • FailedMessiah.com

The IDF closed a mess hall to women and blocked a female officer who tried to enter, Ha’aretz reported tonight.

The incident happened at the Tel Hashomer induction center Thursday when new recruits from the Nahal Haredi battalion were eating.

The IDF reportedly admitted the incident happened but justified it by saying that it had promised that there would be no females near haredi recruits during their induction.

But confirming multiple reports over the past two years by FailedMessiah.com and several Israeli media sources, Channel 2 News reported tonight that the battalion commander, Colonel Uri Levi, said he most of the battalion’s new ‘haredi’ recruits were not actually haredim.

“A minority [of these new ‘haredi’ recruits] come from haredi homes, and some are not observant at all,” Levi recently wrote.

A reservist at the base today told Ha’aretz that about 80 new recruits were inducted into the battalion. Most of them wear the knitted skullcap identified with Zionist Orthodoxy, he noted.

Normative Zionist Orthodoxy would not bar males from eating in the same restaurant or mess hall as a female.

The reservist said a female officer came to the mess hall and tried to enter but was prevented from doing so. She was told she could not go in to eat because the ‘haredi’ recruits were inside.

“If a female officer can’t sit in the mess hall on this day, we’ve gone crazy. What if a group of settlers said they didn’t want to sit with Arabs or Druze, or that we couldn’t serve with Muslims?” the recruit, who said he knows the haredi community very well, told the paper.

After the female officer was prevented from entering the mess hall, other female soldiers who came to eat were sent by the IDF to another mess hall that is usually reserved for officers only, the reservist also said.

Similar incidents have happened in the past and the IDF has said that its policy is that if a female soldier needs to eat, she can enter the mess hall and eat, despite the presence of haredim.

But that purported policy is rarely enforced – especially since Israel’s Defense Minister Moshe Ya’alon of the right-wing Likud Party, has consistently tried to inflate the numbers of actual haredim serving in the IDF while at the same time skirting a law that mandates haredi yeshiva students of draft age be drafted into the IDF just like all other Jewish Israeli men are.

Haredi rabbinic and political leaders vehemently oppose that law, and Ya’alon and Prime Minister Benjamin Netanyahu have repeatedly promised them that they will not enforce it.

The IDF still tried to claim it had done nothing wrong in the latest incident.

“Service of haredi soldiers is carried out in coordination with their needs and without hurting other groups. Induction day for the haredim is carried out on a designated date. On that day the new soldiers eat in a mess hall intended for the inductees separately and in keeping with the rules of service on that track. The needs of all soldiers [on the base] are met fully and suitably in a mess room for soldiers stationed at the base, where they eat on a regular basis,” the IDF’s Spokesman’s Office claimed.

The IDF closed a mess hall to women and blocked a female officer who tried to enter, all because new recruits the IDF has designated as haredi were inside eating.