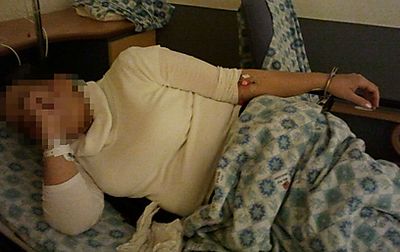 Above and above right: Gila Yashar handcuffed to a hospital bed

Two months ago Yashar was handcuffed to a hospital bed by police acting on the orders of the Jerusalem Rabbinical Court after she refused to accept a divorce from her husband because the rabbinical court brokering the religious divorce ignored a Family Court decision awarding her and her disabled son one of the six apartments her husband owned. She was handcuffed to the hospital bed and then jailed for days after her discharge for refusing the rabbinical court’s illegal order.

"I am in a place which has turned my silence into a courageous voice,. What I have been through has strengthened my feeling that every haredi woman must take her fate into her own hands and impact the political arena. When B'Zechutan reaches the Knesset, we will be able to make a change for all haredi women, so that none of them becomes a victim like me,” Yashar told Ynet.

Member of Knesset Aliza Lavie of the centrist Yesh Atid Party is the chairwoman of the Knesset's Committee on the Status of Women and Gender Equality. She helped Yashar when she was jailed, and recently met her at an election panel discussion in Jerusalem.

"I was in for an exciting surprise when I ran into Gila at the panel. I discovered a strong, impressive woman, who has chosen to take control of her fate and singlehandedly make a change.…Those [i.e., the existing all-male haredi political parties] who are supposed to be representing [haredi women] in the Knesset today do not represent them in many cases. I hope that in the next Knesset [Gila Yashar and I] will get to work side by side, and continue advancing and leading a policy which empowers women from all sectors in Israel,” Lavie reportedly said.

Yashar is the mother of seven children, one of whom is disabled.

But the woman’s husband refused to pay the child support the civil family court ordered and had for the last two years ignored an order from that family court to turn over one of several apartments he owns to his wife as part of the divorce settlement he initially agreed to.

Instead, the woman’s husband eventually went to the official state rabbinical court and opened a divorce case there.

In response, the family court ruled that woman did not have to take a get (Jewish religious divorce document) from her husband until he complied with their orders.

Earlier this month, the religious court issued a summons to the woman, but she did not attend the scheduled hearing because she had just undergone surgery and was ill. Instead, through her advocates from the Rackman Center she gave the rabbinical court notes from her physicians documenting her condition.

The police arrested her Tuesday and brought her before the rabbinical court. Its three haredi rabbi-judges – Avraham Scheinfeld, Eliyahu Abergil and Mordechai Toledano – gave her a divorce agreement to sign.

She refused, telling the rabbi-judges that her husband had not given her the apartment specified in their family court settlement and that the family court had given her permission to refuse to accept the get until her husband complied.

The haredi rabbi-judges immediately ordered police to jail her for a week for “get refusal.”

In order to get out of jail earlier than that and care for her children, she would have had to pay a bond of 10,000 shekels ($2,548) – money she doesn’t have, in large part because of her husband’s actions.

As police were taking her to prison, she became so ill that they had to take her to Shaare Tzedek Hospital instead, where she was admitted. But police and cuffed her to her hospital bed – a violation of both police procedure and the policy of Israel’s medical societies.

She was un-handcuffed after Ynet's story on her abuse by police was published and re-reported by other Israeli media outlets, and she was discharged from the hospital within 48 hours . Eight days later, after Ynet and then other Israeli media reported the story of her mistreatment, the religious court held a special session and finally got her a religious divorce that protected her financial rights.

"Four years of physical, mental and verbal violence have come to an end. I would like to say to all women who are suffering: Don't let this go on, because things only get worse. No woman should have to go through what did,” Yashar told Ynet.

Haredi Woman Arrested, Chained To Hospital Bed For Refusing To Accept Get From Husband.