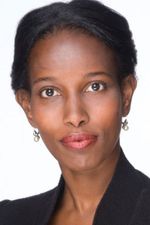 Speaking at the New York City home of Israeli Consul General Ido Aharoni last Thursday, Ayaan Hirsi Ali said wants to convert to Judaism but hasn’t done so yet because of the difficulty in doing so, the Jewish Week has just reported.

“One day I hope to convert to Judaism. I tried it but it was very difficult,” she reportedly said.

45-year-old Hirsi Ali, the Somalia-born free speech activist, anti-FGM campaigner, author, filmmaker and former Dutch politician who has lived with frequent death threats from radical Islamist Muslims for more than a decade, spoke at an “Intellectual Salon” hosted by Aharoni and his wife.

Hirsi Ali, whose new book is titled, “Heretic: Why Islam Needs A Reformation Now,” also reportedly insisted US President Barack Obama was naïve because he fails to understand that in the Islamic fundamentalist mind, compromise equals shame.

“Their minds are frozen in the Middle Ages. Change will only come from the heretics.…Why, Mr. President, do you insist on [speaking of] what Islam should be” – a religion of peace – “instead of what it is?” Hirsi Ali asked.

In 2004, death threats were made against Hirsi Ali and filmmaker Theo van Gogh after the release of Submission, a short film critical of Islam they collaborated on. Van Gogh – a nephew of the famous Dutch painter Vincent Van Gogh – was then assassinated by a Dutch Muslim and Hirsi Ali fled to the US. She now works for the conservative think tank the American Enterprise Institute. She reportedly defines herself as “a woman, an apostate, a lover of Israel, and a lover of Zion” even though she is still thought to be in danger from Islamic fundamentalist extremists.

“I hope and pray I die in bed of old age at 100. But if they get me before then, please, I beg of you, do not give in,” she reportedly said.