Did A Volcanic Cataclysm 40,000 Years Ago Trigger The Final Demise Of The Neanderthals? 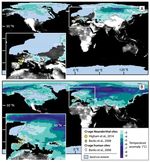 Researchers note that the CI volcanic eruption approximately coincided with the final decline of Neanderthals as well as with dramatic territorial and cultural advances among anatomically modern humans. 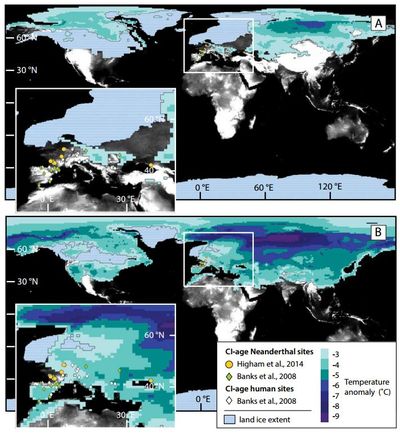 Above and Above right: Annually averaged temperature anomalies in excess of 3°C for the first year after the Campanian Ignimbrite (CI) eruption compared with spatial distribution of hominin sites with radiocarbon ages close to that of the eruption. (Image credit: B.A. Black et al. and the journal Geology.) Please click to enlarge.

Did A Volcanic Cataclysm 40,000 Years Ago Trigger The Final Demise Of The Neanderthals?
Geological Society of America/ Geology

Boulder, Colo., USA - The Campanian Ignimbrite (CI) eruption in Italy 40,000 years ago was one of the largest volcanic cataclysms in Europe and injected a significant amount of sulfur-dioxide (SO2) into the stratosphere. Scientists have long debated whether this eruption contributed to the final extinction of the Neanderthals. This new study by Benjamin A. Black and colleagues tests this hypothesis with a sophisticated climate model.

Black and colleagues write that the CI eruption approximately coincided with the final decline of Neanderthals as well as with dramatic territorial and cultural advances among anatomically modern humans. Because of this, the roles of climate, hominin competition, and volcanic sulfur cooling and acid deposition have been vigorously debated as causes of Neanderthal extinction.

They point out, however, that the decline of Neanderthals in Europe began well before the CI eruption: "Radiocarbon dating has shown that at the time of the CI eruption, anatomically modern humans had already arrived in Europe, and the range of Neanderthals had steadily diminished. Work at five sites in the Mediterranean indicates that anatomically modern humans were established in these locations by then as well."

"While the precise implications of the CI eruption for cultures and livelihoods are best understood in the context of archaeological data sets," write Black and colleagues, the results of their study quantitatively describe the magnitude and distribution of the volcanic cooling and acid deposition that ancient hominin communities experienced coincident with the final decline of the Neanderthals.

In their climate simulations, Black and colleagues found that the largest temperature decreases after the eruption occurred in Eastern Europe and Asia and sidestepped the areas where the final Neanderthal populations were living (Western Europe). Therefore, the authors conclude that the eruption was probably insufficient to trigger Neanderthal extinction.

However, the abrupt cold spell that followed the eruption would still have significantly impacted day-to-day life for Neanderthals and early humans in Europe. Black and colleagues point out that temperatures in Western Europe would have decreased by an average of 2 to 4 degrees Celsius during the year following the eruption. These unusual conditions, they write, may have directly influenced survival and day-to-day life for Neanderthals and anatomically modern humans alike, and emphasize the resilience of anatomically modern humans in the face of abrupt and adverse changes in the environment.

Campanian Ignimbrite volcanism, climate, and the final decline of the Neanderthals
Benjamin A. Black et al., University of California, Berkeley, California, USA. Published online ahead of print on 19 March 2015; http://dx.doi.org/10.1130/G36514.1.

Posted at 11:39 AM in History, Science | Permalink

Did A Volcanic Cataclysm 40,000 Years Ago Trigger The Final Demise Of The Neanderthals?

Researchers note that the CI volcanic eruption approximately coincided with the final decline of Neanderthals as well as with dramatic territorial and cultural advances among anatomically modern humans.