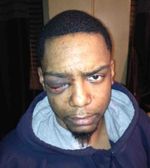 Charges one of the five indicted hasidic Shomrim street patrol members who allegedly savagely beat a gay black man walking home from a party in the early hours of December 1, 2013 reportedly will be dropped. 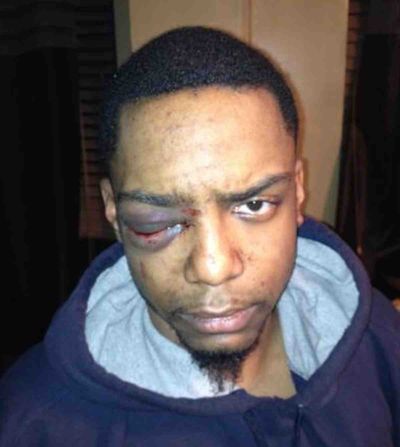 Above and above right: Taj Patterson after the attack

Charges To Be Dropped Against One Shomrim Member Indicted For Gang Assault
Shmarya Rosenberg • FailedMessiah.com

Charges filed against one of the five indicted hasidic Shomrim street patrol members who allegedly savagely beat a gay black man who was walking home from a party will reportedly be dropped, the Daily News reported.

29-year-old Aharon Hollender will walk free because the only eyewitness against him could not pick Hollender out of a police lineup – a lineup held this February, more than 14 months after the beating, which took place in in the early hours of December 1, 2013 in the Williamsburg section of Brooklyn, New York.

The other four hasidic men charged the attack were identified by two different eyewitnesses who recognized them from what the Daily News calls “earlier encounters.”

More than a dozen Williamsburg Shomrim members allegedly participated in the attack, which was witnessed by a city bus driver, her passengers and others - some of whom allegedly took photos of the attackers and their cars.

Additionally, there should have been security camera footage of the attackers and their vehicles. But a source close to the situation told FailedMessiah.com last year that Shomrim members went store to store, house to house and took that footage, sometimes wiping clean hard drives and destroying storage disks to protect the attackers.

Police have made no arrests related to that alleged obstruction of justice and Brooklyn District Attorney Kenneth Thompson – who has grown especially close to Satmar hasidic leadership over the past year – appears to be prosecuting the case as if no photographic evidence ever existed.

The attack on Patterson by the gang of white hasidim thought to be a hate crime, in part because the hasidic gang allegedly yelled anti-gay slurs during the beating.

But Thompson did not file any hate crime charges.

Charges are expected to remain in force against the other four hasidic men charged in the gang assault beating, Abraham Winkler, Mayer Herskovic, Pinchas Braver and Joseph Fried.

Shomrim supporters claim only Winkler and Herskovic are actual members while Braver and Fried were only Shomrim “wannabes.” It is Braver and Fried, these Shomrim apologists claim, who actually instigated the beating.

But while then-NYPD Police Commissioner Raymond Kelly said the group appeared to wearing similar uniform jackets, he refused to identify the men as Shomrim members.

“A group with some sort of uniform jacket with a logo may have been involved,” Kelly said, insisting that the NYPD hadn’t yet determined if the attackers were members of the Williamsburg Shomrim or another similar Jewish neighborhood street patrol.

Patterson was on his way home from a party about 4:00 am December 1, 2013 when more than a dozen hasidic men jumped him at Flushing Avenue near Spencer Street. The hasidic gang punched and kicked Patterson and yelled anti-Gay slurs.

Patterson suffered a broken eye socket, a torn retina, blood clotting, and cuts and bruises to his knee and ankles. He lost vision in his right eye, as well.

The hasidic mob then allegedly tried to run over witnesses who were taking pictures of the vehicles the haredim had arrived in.

“The majority of them [were] wearing a jacket with three letters. I know the first letter is an ‘S.’ Under those three letters there was a word that started with an ‘S’,” MTA bus driver Evelyn Keys, a witness to the attack, said.

“They were wearing emblems. One was wearing a shield on his shirt. It was definitely a police force,” another witness said.

Shomrim members then allegedly went business to business, synagogue to synagogue, yeshiva to yeshiva and store to store in a half-mile radius of the attack, taking security camera footage.

Meanwhile, the initially NYPD did little to pursue the case, allowing Shomrim the time it needed to destroy or conceal evidence. After that, the NYPD also failed to vigorously purse the case, and for months it was stagnant – despite several eyewitnesses, some of whom knew at least two of the assailants.

In March of 2014, the case was not even flagged in the NYPD’s computer system, and the NYPD’s official spokesman told FailedMessiah.com that despite stories in the Daily News, on local television news and on FailedMessiah.com, he did not know the case and said his office had no updated information on it.

Five of the 12 to 15 Shomrim members who allegedly beat Patterson were finally arrested in mid-April 2014 – almost 5 months after the attack.

Ten months later, almost 15 months after the attack, the only eyewitness to have seen Aharon Hollender during the attack was asked to pick him out of a police lineup.

The eyewitness could no longer do so.

The DA and NYPD have never explained why the other Shomrim members there during the attack were not arrested or charged.

NYPD Has No Updates In Patterson Beating.

Is the New Brooklyn DA Telling The Truth?

Is The New Brooklyn DA Telling The Truth, Part 2.

Posted at 04:06 AM in Bigotry & Racism, Crime, Litigation, etc., Haredim, Homophobia and its Discontents | Permalink

Charges one of the five indicted hasidic Shomrim street patrol members who allegedly savagely beat a gay black man walking home from a party in the early hours of December 1, 2013 reportedly will be dropped.