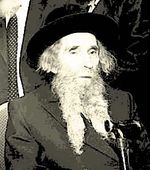 Supreme non-hasidic haredi rabbinic leader Rabbi Ahron Yehuda Leib Steinman insists that the head of the Yesh Atid Party, former Finance Minister Yair Lapid, cannot be put in the halakhic (Orthodox Jewish law) category of tinok shenishba (literally a toddler who was captured by non-Jews and who grew up without knowing anything about Judaism; today, all Jews who were raised in non-Orthodox Jewish communities are considered to be part of this category according to the vast majority of haredi and Orthodox rabbis).

Instead, Steinman reportedly said Lapid’s purported anti-haredi actions are done with knowledge and are intentional – “he acts with the intent to harm,” Steinman said – meaning that he would be fully punishable for those actions under halakha.

That ruling by Steinman would essentially put Lapid into the category of rodef (a person who is pursuing another person – in this case, the entire haredi community – in order to destroy it). Under halakha, people who are deemed to be rodefs can be killed by anyone in order to stop them.

Lapid’s party has championed drafting haredi yeshiva students into the IDF, forcing haredi schools to comply with the law and teach math and other secular subjects, and ending special government subsidies for haredim – subsidies that non-haredim who serve in the IDF cannot get.