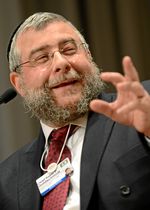 "…The Jewish community in Denmark is a microcosm of what is happening to Jewish communities across the continent. On the one hand they are under attack from extremist Muslims who see every Jew as a legitimate target, on the other hand, freedom of religion is curtailed by the government, religious slaughter has been forbidden and the parliament is in discussions about the future of religious circumcision.…"

Rabbi Pinchas Goldschmidt is the President of the Conference of European Rabbis. He’s also a great-grandson of a previous chief rabbi of Copenhagen, Denmark.

Goldschmidt responded to last night’s terror attack at a synagogue in Copenhagen by issuing a brief statement – a statement that conflates the Islamic fundamentalist terror attack with legitimate attempts by European governments to ensure animals are humanely slaughtered.

This horrific terror attack is both sickening and a sign of the worsening extremism spreading across Europe.

The Jewish community in Denmark is a microcosm of what is happening to Jewish communities across the continent. On the one hand they are under attack from extremist Muslims who see every Jew as a legitimate target, on the other hand, freedom of religion is curtailed by the government, religious slaughter has been forbidden and the parliament is in discussions about the future of religious circumcision.

I truly hope that this latest attack will lead the people of Denmark to rally behind the Jewish community just as they did in 1943, securing the future of the community.

As Goldschmidt well knows, while it may be possible to argue that there is a basic right to slaughter animals, there is no leave to argue shechita (Jewish ritual slaughter of animals for food) is being done humanely unless rabbis have taken every possible step to ensure it is humane according to modern veterinary science and the commercial shechita process is made completely open and transparent.

But rabbis like Goldschmidt have consistently refused to do that, and pro-sechita activists in the Orthodox and haredi communities have repeatedly lied about the science and about how shechita is actually carried out commercially – which is often but not always far more cruel than the idealized picture of shechita these activists peddle.

But leaving this all aside, to conflate radical Islamic fundamentalist terror with countries that demand pre-slaughter stunning of animals is inaccurate and offensive in the extreme.

As for circumcision, all one needs to do is look at the metzitzah b'peh (the direct mouth-to-bleeding-penis brief sucking done by haredi mohels after cutting off a baby's foreskin) controversy and haredi rabbis' responses to it to see why banning non-medically-required infant circumcision might seem like a good and justifiable idea to many people, and to equate those people with Islamic fundamentalist terrorists (who also would suffer from that ban, by the way) or to call those people anti-Semitic or say they are motivated by anti-Semitism is offensive and wrong.

Goldschmidt should apologize for that, as well.

At the same time, in response to the Copenhagen attack Israel's Prime Minister Benjamin Netanyahu called for all European Jews to immigrate to Israel and touted Israel's open door policy, knowing full well that many of these European Jews or their children will be prevented from marrying in Israel due to questions – many made up out of whole cloth – by Israel's haredi-controlled state chief rabbinate. They will also have difficulty getting burial plots in Jewish cemeteries and will face other types of haredi-generated government-enforced discrimination.

But past that, there is a fundamental difference between having and open door policy and exploiting a terror attack.

Like he did boorishly in Paris, Netanyahu is trying to use this latest terror attack for his own short term political gain. Israel's Knesset election is only a month away, and nothing helps Netanyahu more at the polls than appearing to be strong against terror while at the same time drawing foreign Jews – especially rich, white European foreign Jews – to Israel. It reinforces the right-wing's hackneyed narrative that sees all non-Jews as evil or nearly evil and as self-serving and craven. That narrative also views all opposition to any of Israel's policies as rooted in anti-Semitism or outright anti-Semitic, and it views the State of Israel as the only truly safe place in the world for Jews to live, thereby justifying Israel's existence and, more importantly, the right-wing''s policies.

As the former chief rabbi of Denmark Michael Melchior, who lives in Israel (and who is center-left politically), told Ha'aretz today, “I think [what Netanyahu said] is not an appropriate reaction. We have a prime minister who says Israel is about to come under an attack [from Iran] of terrible dimensions, and at the same time says that everyone should run away from [Europe] to come here. I don’t even want to go into this way of thinking. I think that the answer to terror is to fight it wherever it is.”

But the self-serving spin put on this by Netanyahu and his allies is offensive. Jewish community leaders and rabbis across Europe have asked Netanyahu to stop doing it, but Netanyahu continues anyway.

Just like the Charlie Hebdo march in Paris the uninvited Netanyahu crashed, bullying his way to the front of a gaggle of European leaders to get his photo op, this is not about the safety and security of European Jews. Instead, it is all about Netanyahu, a man who is almost universally despised on a personal level by his opponents – and by many of his closest allies, as well.

"…The Jewish community in Denmark is a microcosm of what is happening to Jewish communities across the continent. On the one hand they are under attack from extremist Muslims who see every Jew as a legitimate target, on the other hand, freedom of religion is curtailed by the government, religious slaughter has been forbidden and the parliament is in discussions about the future of religious circumcision.…"