The Real Truth Behind Animal Sacrifice And Kosher Slaughter

The ancient Israelites believed that an animal's life-force was contained in its blood and that offering that blood to God was necessary if the animal was to sacrificed and eaten. But many other cultures have similar types of ancient beliefs about killing animals, and developed their own religious rituals to reflect them. All of this, however, dates back to something earlier and more primal, and says much about what makes us human. 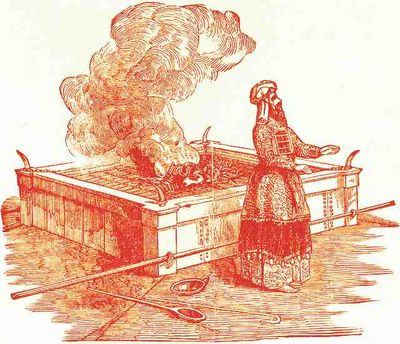 From scholar of religions Karen Armstrong's Fields of Blood via DelanceyPlace.com:

"Each of us has not one but three brains that coexist uneasily. In the deepest recess of our gray matter we have an 'old brain' that we inherited from the reptiles that struggled out of the primal slime 500 million years ago. Intent on their own survival, with absolutely no altruistic impulses, these creatures were solely motivated by mechanisms urging them to feed, fight, flee (when necessary), and reproduce. Those best equipped to compete mercilessly for food, ward off any threat, dominate territory, and seek safety naturally passed along their genes, so these self-centered impulses could only intensify. But sometime after mammals appeared, they evolved what neuroscientists call the limbic system, perhaps about 120 million years ago. Formed over the core brain derived from the reptiles, the limbic system motivated all sorts of new behaviors, including the protection and nurture of young as well as the formation of alliances with other individuals that were invaluable in the struggle to survive. And so, for the first time, sentient beings possessed the capacity to cherish and care for creatures other than themselves.

"Although these limbic emotions would never be as strong as the 'me first' drives still issuing from our reptilian core, we humans have evolved a substantial hard-wiring for empathy for other creatures, and especially for our fellow humans. Eventually, the Chinese philosopher Mencius (c. 371-288 BCE) would insist that nobody was wholly without such sympathy. If a man sees a child teetering on the brink of a well, about to fall in, he would feel her predicament in his own body and would reflexively, without thought for himself, lunge forward to save her. There would be something radically wrong with anyone who could walk past such a scene without a flicker of disquiet. For most, these sentiments were essential, though, Mencius thought, somewhat subject to individual will. You could stamp on these shoots of benevolence just as you could cripple or deform yourself physically. On the other hand, if you cultivated them, they would acquire a strength and dynamism of their own.

"We cannot entirely understand Mencius's argument without considering the third part of our brain. About twenty thousand years ago, during the Paleolithic Age, human beings evolved a 'new brain,' the neocortex, home of the reasoning powers and self-awareness that enable us to stand back from the instinctive, primitive passions. Humans thus became roughly as they are today, subject to the conflicting impulses of their three distinct brains. Paleolithic men were proficient killers. Before the invention of agriculture, they were dependent on the slaughter of animals and used their big brains to develop a technology that enabled them to kill creatures much larger and more powerful than themselves. But their empathy may have made them uneasy. Or so we might conclude from modern hunting societies. Anthropologists observe that tribesmen feel acute anxiety about having to slay the beasts they consider their friends and patrons and try to assuage this distress by ritual purification. In the Kalahari Desert, where wood is scarce, bushmen are forced to rely on light weapons that can only graze the skin. So they anoint their arrows with a poison that kills the animal --only very slowly. Out of ineffable solidarity, the hunter stays with his dying victim, crying when it cries, and participating symbolically in its death throes. Other tribes don animal costumes or smear the kill's blood and excrement on cavern walls, ceremonially returning the creature to the underworld from which it came.

"Paleolithic hunters may have had a similar understanding. The cave paintings in northern Spain and southwestern France are among the earliest extant documents of our species. These decorated caves almost certainly had a liturgical function, so from the very beginning art and ritual were inseparable. Our neocortex makes us intensely aware of the tragedy and perplexity of our existence, and in art, as in some forms of religious expression, we find a means of letting go and encouraging the softer, limbic emotions to predominate. The frescoes and engravings in the labyrinth of Lascaux in the Dordogne, the earliest of which are seventeen thousand years old, still evoke awe in visitors. In their numinous depiction of the animals, the artists have captured the hunters' essential ambivalence. Intent as they were to acquire food, their ferocity was tempered by respectful sympathy for the beasts they were obliged to kill, whose blood and fat they mixed with their paints. Ritual and art helped hunters express their empathy with and reverence (religio) for their fellow creatures -- just as Mencius would describe some seventeen millennia later -- and helped them live with their need to kill them."

The Real Truth Behind Animal Sacrifice And Kosher Slaughter

The ancient Israelites believed that an animal's life-force was contained in its blood and that offering that blood to God was necessary if the animal was to sacrificed and eaten. But many other cultures have similar types of ancient beliefs about killing animals, and developed their own religious rituals to reflect them. All of this, however, dates back to something earlier and more primal, and says much about what makes us human.