NYC Won't Releasae Names Of Infected Mohels, Even If They've Been Banned By City

Under the new deal with haredim, de Blasio administration officials said it is unlikely New York City would release the name of any mohel who was banned after testing positive for infecting an infant with herpes – meaning Bill de Blasio has opted to further his own political career while endangering haredi children. 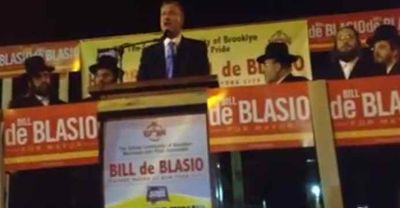 Above: The campaign rally staged for candidate Bill de Blasio by the Satmar Aharon faction just days before the 2013 election. It was at this rally that Rabbi Moshe Indig loudly announced over the PA system that de Blasio had promised to end the informed consent requirement for metzitzah b' peh in exchange for 10,000 Satmar bloc votes.

…Administration officials said it was unlikely that the city would release the name of any mohel who was banned after testing positive for infecting an infant with herpes.

They also could not say what the policy would be in cases where a mohel tests positive for herpes — prevalent in more than 70% of the population — but not for the strain that infected the baby.…

In April 2014, Bruce Vladeck, a health board member, told the health department’s general counsel, Tom Merrill, in an email: “I’m not unmindful of the politics, but the way in which these folks are flouting our rules is a disgrace and an embarrassment….I think the Board of Health is entitled to know what enforcement actions the Department is planning. I would support anything real.”

From the outset, the city never planned much in the way of enforcing the law.

Mohels were instructed to keep signed copies of consent forms for one year. But the health department never conducted spot checks to see if mohels were complying with the rule. Instead, they only asked for copies of the forms if a parent complained, or if there was an investigation into a suspected cases of MBP-related herpes.

In the two years since the regulation was brought into force and despite five confirmed cases of neonatal herpes following MBP during that time, the city has only identified two mohels, only one of whom had a consent form.

In the other cases, ultra-Orthodox parents refused to identify the mohel who circumcised their son.

The two mohels who were identified were banned from performing MBP. But the city will not release their names so parents have no way of knowing which mohels to avoid.…

Asked on the conference call why the city does not ban the practice, an administration official said a ban would force it underground. “They will not stop practicing [MBP] no matter what we say,” the official said.

The easiest way for haredim to scam this agreement is to send in a mohel who did not do the circumcision of the baby found to be infected. By switching out one mohel for another, haredim insure that even if the ringer mohel is found to be infected with Herpes, nothing will happen. He'll still be able to do circumcisions and the actual mohel who gave the baby herpes will, too.

This type of scam was very common in haredi areas of Europe and was used to dodge the draft and for other related things.

For example, a wealthy family might pay a poor family a sizable amount of money or forgive a debt in exchange for the poor family's son posing as the rich son and serving in the Tzar's army (which was admittedly a hell hole in which Jews forced to serve were often trapped for 25 years).

But the HSV-1 virus is so hard to gather and so hard to test that one of the most common test-related failures is a false negative, meaning actual herpes carriers who infect babies have a very good chance of having their DNA test not match the baby's virus sample.

And that means no matter how haredim play this game, they win.

That some of their children will lose and some even die because of it?

That's the price of being haredi – or, in the case of de Blasio, of being a prostitute.

Why Haredim Do MBP.

A Graphic History Of MBP.

A History Of MBP Disease Transmission.

Bill De Blasio Promises Satmar That In Exchange For Votes, He Will Repeal Informed Consent For Dangerous Haredi Circumcision Practice.

NYC Won't Releasae Names Of Infected Mohels, Even If They've Been Banned By City

Under the new deal with haredim, de Blasio administration officials said it is unlikely New York City would release the name of any mohel who was banned after testing positive for infecting an infant with herpes – meaning Bill de Blasio has opted to further his own political career while endangering haredi children.