"Clear threats are made against newspaper owners. They say that whoever won't obey them will be personally persecuted, and so will his business," one of the residents says. "This is a continuation of the Iranization of Beit Shemesh, not to mention ISISiazation." 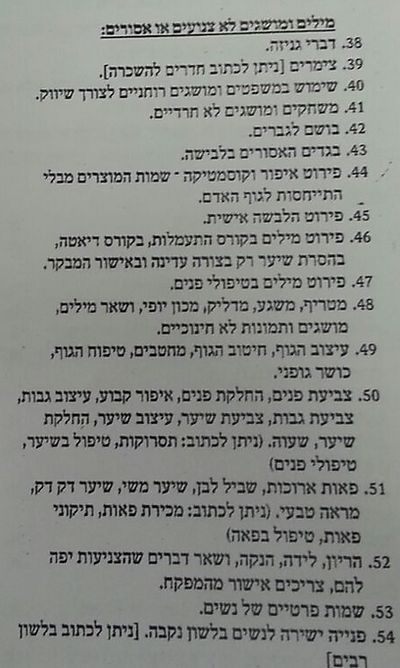 Above and above right: the modesty squad's new orders (partial)

Ynet has a much more complete report about the new modesty orders from Beit Shemesh haredi modesty squad to advertisers in local haredi newspapers and for the newspaper themselves than what was posted yesterday by others. Here's an excerpt:

…The document [from the haredi modesty squad in Beit Shemesh, the Committee for the Purity of the Camp] clarifies that all ads must be submitted to the inspector and must not be published without his specific approval.

The city's moderate haredi population says it is being terrorized by these zealots through the media. "Clear threats are made against newspaper owners. They say that whoever won't obey them will be personally persecuted, and so will his business," one of the residents says. "This is a continuation of the Iranization of Beit Shemesh, not to mention ISISiazation."

"There is a lot of money involved in this. For example, thousands of shekels which are paid by every newspaper or leaflet editor for the spiritual supervisor's work," says a well-known haredi activist. "In addition, they have insane squads which remove any ad which is not supervised by them from mailboxes.

"These are the same people who are responsible for beating up soldiers, burning 'immodest' clothing stores for women and violent protests. It's time for the Shin Bet's 'Jewish department' to take care of them."

The set of rules states that newspapers must not feature pictures or silhouettes of young girls, men demonstrating different products, women's wigs and treatment beds. Pictures of small children, makeup and cosmetics, as well as women's clothes and shoes, will only be published "in a gentle, clearly haredi manner."
In addition, a leaflet must not feature a double bed, unless it is separated in two by a piece of furniture, and "personal clothing" and cosmetics must not take up more than one-quarter of the page.

Immodest or banned words and terms, including 'great' and 'awesome'
According to the Committee for the Purity of the Camp, Beit Shemesh's newspapers must not publish ads for martial arts courses, driving courses for women and yeshiva students, acting and singings schools, etc. Couples counseling will only be included in the leaflet "with the approval of the city's rabbis." Sing-along events, cantillation and Hasidic singing are also off limits, especially when they include women. Singers and lecturers performing in "mixed events" and "entertainers and other non-educational things" must not be advertised at all, and that also includes performances by female singers and dancers of course. Lecturers must be approved by the city's rabbis.

Additional restrictions include publishing rooms for rent (unless they are in clear haredi areas), hotels (only if they have a kashrut certificate for their "nature" and of course food), vacations for women (only on behalf of haredi organizations and with the approval of a recognized rabbi), swimming pools (only separated), beaches (approved by the Committee), stores in non-haredi areas (only those approved by the supervisor), trips and attractions (only those that "match the haredi lifestyle").
Shopping malls, restaurants which are not in a haredi area, "unruly places," "prohibited" workplaces and Shabbat-desecrating businesses are off limits. The radical group is also seeking to dictate the terminology used by the advertisers: Instead of "guest rooms" they must write "rooms for rent," they must not use the terms "spiritual" for marketing needs, must not mention "non-haredi" games, men's perfume, banned clothing and must not use "words describing facial treatments." Women's first names and words such as "great" and "awesome" must not be used either. Mentioning pregnancy, childbirth and breastfeeding requires an approval from the supervisor.

The committee also bans the use of "men's names in women's products (such as "Reuven Cohen Wigs") and "military, police and academic terms."…

"Clear threats are made against newspaper owners. They say that whoever won't obey them will be personally persecuted, and so will his business," one of the residents says. "This is a continuation of the Iranization of Beit Shemesh, not to mention ISISiazation."