The Rabbinical Congress for Peace (RCP), a Chabad-founded right-wing front group, put up hundreds of billboards across Israel with the headline “ceding territory is a danger to life,” urging voters to vote for right-wing political parties. 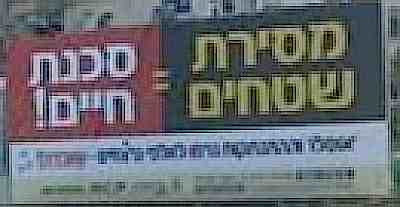 The Rabbinical Congress for Peace (RCP), a Chabad-founded right-wing front group, put up hundreds of billboards across Israel with the headline “ceding territory is a danger to life,” Arutz Sheva reported.

“Thousands were murdered as a result of Oslo and the Disengagement [from Gaza]. That’s a fact!” the billboards read.

The RCP, which claims to have more than 350 members, previously ruled that it is forbidden to negotiate any peace agreement that involves Israel withdrawing from any amount of territory, no matter how small, that is currently under Israeli control. That ruling is based solely on the late Chabad-Lubavitch Rebbe Rabbi Menachem Mendel Schneerson’s  understanding of Shulkhan Arukh (Code of Jewish Law) Orach Chaim 329.

Schneerson’s understanding has no support from classical rabbinic commenters and no precedent in Judaism. It was rejected out of hand by Orthodox and haredi rabbis from across the spectrum of Orthodoxy except for the right-wing of Zionist Orthodoxy, which adopted it because it could be used to support their theological position that ‘redeeming’ land that was once part of biblical Israel and Judea speeds the coming of the messiah.

The actual text of the Shulkhan Arukh reads as follows.

“When it is a city close to the border, then, even if they [i.e., an unannounced non-Jewish army or horde of people] want to come [into our land] only for the purpose of [taking] straw and stubble [from us without permission; i.e., what they want to steal, loot or pillage is of insignificant value and no Jewish lives are immediately put at risk by it], we desecrate the Sabbath because of them [anyway by sending out our army to stop them], because [if we do not stop them now] they may [eventually] conquer the city [from the base they would establish on our land], and from there the [rest of the] land [of Israel] will be easy for them to conquer.” – Shulkhan Arukh, Orach Chaim 329:6

The Shulkhan Arukh says nothing about peace treaties or negotiations between governments or other entities, and the vast majority of non-Chabad and non-right-wing Zionist Orthodox rabbis reject its use in that context by Chabad.

“The halakha [Orthodox Jewish law] obligates every rabbi to bring the Laws of Pikuah Nefesh [saving life] to the forefront, to explain it to every member of their community emphatically and in no uncertain terms. In the midst of all the confusion of the election campaigns it is very easy to forget what is the most important issue – the security of the citizens of Israel,” the RCP said in a statement.

“These days we are witnessing how various groups and campaigns that are being funded with huge sums by the European Union are trying to blur the reality, to confuse the public and make it forget what has happened here in the last 23 years. Not only has no one been held accountable for the thousands of victims that were caused by withdrawals throughout the years from Oslo until after the Disengagement from Gaza, but there is an attempt to persuade the public to vote for those parties that will continue in this dangerous path,” Rabbi Avrohom Shmuel Lewin, a Chabad hasid who heads the RCP said. "Therefore the campaign slogans by the various parties are concealing the real issue which is at stake. The rabbis are the only ones who are telling it plain and bluntly as it is."

The top RCP rabbi, Joseph Gerlitzky, who is the chairman of the RCP and who also serves as the state-funded Chief Rabbi of central Tel Aviv, siad that blocking any peace agreement that cedes land is more important than funding for yeshivas or for social needs.

"Our only intention is that the voter before he votes should be aware that according to Jewish law the most important issue to take into account before any other consideration - whether it’s money to yeshivas or a solution to the housing crisis, is the security of the residents of Israel without compromising the integrity of the Land of Israel - then [after that has been assured,] vote according to his or her conscience. To put it plainly: our intent is not to tell the voter who to vote for but what to vote for Gerlitzky, said.

The Rabbinical Congress for Peace (RCP), a Chabad-founded right-wing front group, put up hundreds of billboards across Israel with the headline “ceding territory is a danger to life,” urging voters to vote for right-wing political parties.