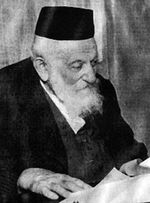 When they got to the hospital Dr. Moritz "Moshe" Wallach, the hospital’s haredi founding director, refused to admit the boy or even allow him and his father to enter the hospital building. Wallach called them “criminals of Israel who desecrate Shabbos,” hit the father and pushed him and his child out of the of the hospital gate.

The History You Likely Never Heard Of: Israel’s Secular/Haredi Divide Began With A Haredi Doctor’s Abuse Of A Secular Patient Who Broke Shabbat To Get To The Hospital – A Patient Who Died Only Hours After The Doctor Refused To Treat Him
Shmarya Rosenberg • FailedMessiah.com

What began the rift between the secular Zionists who immigrated to Palestine beginning in the 1880s, built Tel Aviv and built the kibbutzim, and the small, old and very poor haredi Palestine settlement, the Ashkenazi section of which dated to the late 1770s?

According to a report in Ha’aretz, this did:

At noon Saturday, August 16, 1913 a train from Jaffa pulled into the Jerusalem station. Palestine was still part of the Ottoman empire, and there were no Shabbat restrictions on public transport. Two passengers on that train, Moshe Dov Berger, a construction worker, and his 16-year-old son Shmuel, who was ill with a throat infection, disembarked and made their way to Shaare Tzedek Hospital. The two were traveling on the order of Shmuel’s doctor, who believed Shmuel’s infection was serious and required hospitalization.

But when they got to the hospital Dr. Moritz "Moshe" Wallach, the hospital’s haredi founding director, refused to admit the boy or even allow him and his father to enter the hospital building. It was “Shabbos,” Wallach allegedly said, and because Shmuel Berger’s illness was not life-threatening, they would have to wait until after Shabbos for Shmuel to be admitted.

Shmuel Berger was finally admitted to Shaare Tzedek after Shabbat ended hours later. But Wallach had misdiagnosed him in that encounter at the hospital’s front gate, and less than 24 hours after turning the boy away, 16-year-old Shmuel Berger would be dead.

Wallach later apparently lied to two commissions of inquiry about the facts of the case, including claiming the the father-son pair had come to the hospital only 20 to 25 minutes before the end of Shabbat, even though they actually arrived their many hours before that and had wait on the sidewalk for those many hours in the hot sun waiting for Shabbat to end so the younger Berger could be admitted.

Moshe Dov Berger said that Wallach was rude, hostile and violent. He said Wallach called them “criminals of Israel who desecrate Shabbos” and that he hit Moshe Dov Berger and threw both Bergers out of the of the hospital gate.

Relying on Wallch’s own testimony – some of which was clearly false – and the one-page medical record of Shmuel Berger compiled by Wallach himself, two commissions of inquiry found that Wallach was not responsible for Shmuel Berger’s death. But neither commission praised Wallach.

The Hebrew Medicinal Society for Jaffa found that “the patient was in critical condition, with no hope of cure, and the unfortunate result was not dependent on Dr. Wallach’s approach one way or the other,” meaning that Wallach’s misdiagnosis and his horrible behavior didn’t matter. Because this was before the discovery of antibiotics, Shmuel Berger would have died anyway.

“We find that the treatment accorded to the patient Berger was correct and appropriate in every respect with the scientific laws of medicine…Even though Dr. Wallach can be faulted for wrongly mixing in religious questions, which are unrelated to medical matters, we find, nevertheless, that this could not have affected the results of the illness,” the Jerusalem commission of inquiry found.

Wallach was sent to Palestine by the haredi community of Germany to establish a hospital for Jerusalem’s Jews. He was a well-known leading haredi figure in Jerusalem from his arrival through his death in 1957. He remained the director of Shaare Tzedek Hospital until 1947, but continued to practice medicine there until his death at age 80 ten years later.

Verena Wulf, who is working on a doctoral thesis at Dusseldorf University on Moshe Wallach and who is also a pharmacist, believes Shmuel Berger death was the result of a severe bacterial inflammation which caused phlegmon – diffuse inflammation of the soft or connective tissue due to infection with microaerophilic streptococci. The inflammation likely spread from Berger’s chest to his throat and may have caused a fatal heart attack.

Dr. Eran Dolev, a former chief medical officer of the Israel Defense Forces who studies the history of medicine, thinks Berger may have had diphtheria, a serious bacterial infection  affecting the mucous membranes of the nose and throat. It can produce a thick, grayish mucous that can block the airway and cause a patient to struggle to breathe. And than can cause a heart attack.

“If that was the diagnosis, then Wallach’s behavior is perplexing, because it would have been a life-and-death case that overrides Shabbat, or at least suspicion thereof,” Dolev reportedly said.

In 1948 during Israel’s War of Independence, wounded soldiers complained that Wallach, who at that point was no longer Shaare Tzedek’s director but was still working there as a physician, went through their personal belongings without permission to see if they had brought any non-kosher-for-Passover food to the hospital during the holiday.

Despite Wallach’s conduct during the war and his behavior in the Berger case, evidence seems to show that Wallach often broke Shabbat law when it was necessary to save the life of a critically ill patient.

But those Shabbat-breaking incidents had limits that would seem odd today. For example, Wallach gave permission for an operation to be conducted on Shabbat but ordered his staff to leave the sutures in patient uncut until Shabbat ended because while the operation was a lifesaving necessity, cutting the sutures used to close the operation’s incision was not.

Wallach went on to co-found of Agudath Israel.

Considered a tzaddik (holy or righteous person, a ‘saint’) by Jerusalem’s haredi community, Wallach’s mishandling of the Berger case and its aftermath both dramatically increased and cemented the secular/religious divide in Palestine, and after that in the State of Israel.

When they got to the hospital Dr. Moritz "Moshe" Wallach, the hospital’s haredi founding director, refused to admit the boy or even allow him and his father to enter the hospital building. Wallach called them “criminals of Israel who desecrate Shabbos,” hit the father and pushed him and his child out of the of the hospital gate.