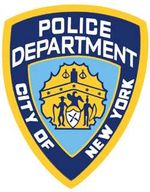 NYPD officers (posthumously promoted to detectives) Rafael Ramos and Wenjian Liu were assassinated last month near the corner of Tompkins Avenue and Myrtle Avenue in Brooklyn. The block of Tomkins Avenue where the officers were murdered has now been renamed "Fallen Officers Way" without permission of the city by cops using official police equipment to post the signs.

NYPD officers (posthumously promoted to detectives) Rafael Ramos and Wenjian Liu were assassinated last month near the corner of Tompkins Avenue and Myrtle Avenue in Brooklyn. Their assassin was mentally ill and had a long history of violence and domestic violence.

What prompted that assassin to come to New York City and shoot police officers was the Eric Garner chokehold death along with a spate of police shootings of black males around the country.

The Patrolman's Benevolent Association, one of the NYPD's unions, tried to blame the assassinations on Mayor Bill de Blasio's remarks regarding what he and his wife have to tell their bi-racial son with regard to dealing with police officers who may stop him. That what de Blasio said is true, and that tens of thousands of African American and bi-racial families have to say the same thing to their sons, made no difference to a police union with a long history of demagoguery and incitement.

None of that changes the fact that two innocent police officers were assassinated by a madman as they sat in a patrol car.

The block of Tomkins Avenue where the two officers were murdered has now been renamed "Fallen Officers Way."

In and of itself, that is a good thing.

What might not be quite so good is the timing of the installation of the new street sign and the fact that it was installed by the NYPD – not be city workers.

The new street sign was put up this morning, which also happens to be Martin Luther King Day – something that, with the NYPD's history and the combativeness and frequent bad behavior of its police officers unions, may not be a coincidence.

Update 2:36 pm CST – According to the Brooklyn Paper, the signs are illegal, and the street was not officially renamed"

Homemade street signs on a section of Tompkins Avenue in Bedford-Stuyvesant where two officers were assassinated declaring the block “Fallen Officers Way” will stay up while the city works to officially co-name streets for the duo elsewhere in the city.

Emblazoned with a Police Department shield and a symbolic blue line, the official-looking street signs appeared sometime on Thursday afternoon at the intersection where gunman Ismaaiyl Brinsley, 28, ambushed and murdered officers Wenjian Liu and Rafael Ramos before running off and killing himself in a nearby subway. The sign refers Liu and Ramos as detectives, acknowledging the posthumous promotions the fallen cops received in the wake of their deaths.

The city says it has no plans to take down the illegal signs right now despite the fact that it is illegal for anyone but the Department of Transportation to install traffic signs on city streets.

“The signs remain in place as we attempt to advise the person who installed them on the process to seek a co-naming and make sure they’re aware the city is designating two streets in honor of our fallen officers in their respective communities,” a spokesman said in an e-mail.…

In other words, NYPD's police unions, using NYPD police vehicles, broke the law and posted the signs. And they intentionally did so on Martin Luther King Day and had only white officers post the illegal street signs. And the proof of that is found in the photograph exclusively published by FailedMessiah.com below.

Is the NYPD corrupt? Is it deeply racist? Many African Americans would answer yes to both questions. And this street sign installation is proving them right. [Thanks to Wigmore for the link for the update.] 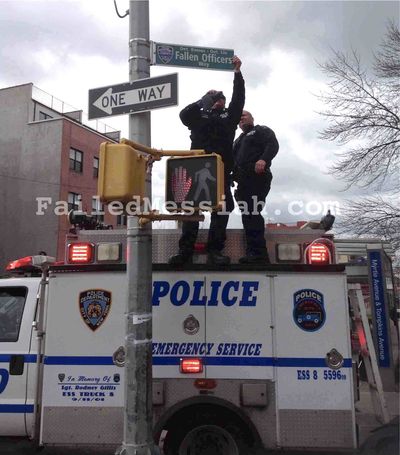 NYPD officers (posthumously promoted to detectives) Rafael Ramos and Wenjian Liu were assassinated last month near the corner of Tompkins Avenue and Myrtle Avenue in Brooklyn. The block of Tomkins Avenue where the officers were murdered has now been renamed "Fallen Officers Way" without permission of the city by cops using official police equipment to post the signs.