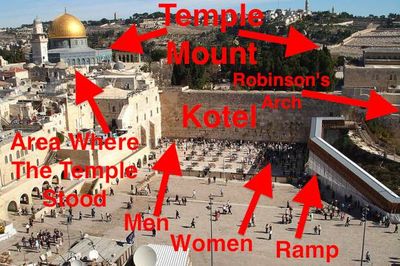 Above and above right: The Kotel and Temple Mount. The stones in question are near Robinson's Arch.

The heap of large building stones piled next to the southern section of the Kotel (Western Wall) in Jerusalem didn’t get there through the Roman destruction of the Second Temple, despite the fact that official signs, books, tour guides and archaeologists have for decades said the opposite.

Instead, Shimon Gibson, the British-born Senior Associate Fellow at the Albright Institute of Archaeological Research in Jerusalem and an adjunct Professor of Archaeology at the University of North Carolina at Charlotte, now says these walls toppled almost than 300 years after the Second Temple’s destruction in the major earthquake that devastated Jerusalem in 363 CE.

Ha'aretz reports that Gibson notes that we now know a lot more about life in Jerusalem after the destruction of the Second Temple than we did in the 1970s when archaeologist Benjamin Mazar popularized the theory that the giant building stones were toppled during the Roman’s destruction of Jerusalem the Second Temple during the First Jewish Revolt against Rome in 70 CE. Mazur’s account jibed with traditional rabbinic stories about the Roman victory.

But recent archaeological digs show that after the Roman victory, Jerusalem – which was renamed Aelia Capitolina by the Romans – was a flourishing city complete with a rich population, beautiful well-built homes, a flourishing commercial life, and wide (and often elegant) streets.

“Now we know much more about the late Roman period. If there was a neighborhood like this there, how could it be that they leave debris from the year 70 CE in the middle of it all? It’s like going out of your house and leaving a pile of debris. You clear it. And why leave the city to bring stones to build new buildings if you have stones next to your house?,” Gibson said.

“Who would buy bread in a place with damaged walls above it and fallen stones [adjacent to it]? You don’t build next to a four-story ruin,” Gibson added.

Gibson also notes the similarity in style and workmanship in the supporting pillars and other pillars that adorned the Temple Mount with those at the Church of the Holy Sepulchre, the Tomb of the Patriarchs and Mamre, all originally Christian shrines built in the early 300s CE, more than 200 years after the Second Temple was supposedly destroyed.

Gibson believes the builders of these structures used the still-existing Temple Mount walls and imitated their architecture and design as an effort by the Church to show that it – not rabbinic Judaism – was the anointed successor to Temple Judaism.

How could Christian builders in 325 CE so successfully mimic those designs and that architecture without having archaeological drawings or photographs?

Constantine, who ruled as Emperor of the Roman Empire from 306 CE to 337 CE, left paganism, converted to Christianity and made Christianity the official Roman state religion.

The earthquake of 363 CE occurred during the rule of Julian the Apostate, Constantine’s nephew, who tried to return the Roman Empire paganism. He encouraged pagan worship but also permitted Jews to return to Jerusalem and build a new temple there.

Jews returned and started rebuilding, but the massive 363 CE earthquake destroyed the foundations of the third temple they had constructed.

“Half of Jerusalem was destroyed during this earthquake. I suggest that the Temple Mount walls fell at the same time. The way the stones lie is also more consistent with an earthquake than destruction by man. I propose that perhaps the debris we see there are also from the destruction of 363 CE,” Gibson said. He also quoted historical sources that detail the deaths of Jewish workers caused by large stones falling from Temple Mount during the earthquake.

Gibson’s theory has been vehemently rejected by many.

“The rockslide doesn’t lie on the street. It lies on a layer of sediment 3-5 centimeters thick. We cleaned this layer very exactingly, and we found 120-125 coins. It is sediment that collected on the street after it went out of use and before the collapse – I suppose in the first winters after the destruction. The last coin we found is from the fourth year of the rebellion, that is to say 69 CE. If Gibson is right, could it be that for 290 years, no other coins were collected under the pile of stones? What happened between 70 and 363?,” Reich said.

However, even Reich does not claim that the Roman Legion destroyed the Temple Mount wall immediately after the destruction of the Temple in 70 CE, and says that destruction could have taken place as late as 130 CE in honor of the visit to Jerusalem then of Emperor Hadian.

“Size matters in archaeology. It’s true buildings collapse, but you are talking about the walls of Temple Mount. That’s not just another structure,” Reich added.

Gibson is not convinced by Reich’s argument. He says that contrary to Reich’s explanation for the coins and sediment, the coins could have ended up underneath the rubble from the Temple Mount wall in other ways – for example, builders could have brought the dirt from elsewhere to level the street, or the rubble could have been moved so it could be used.

“We all accepted as gospel that these stones fell in the year 70, and I don’t want to remove from anyone the symbolism of these stones. But I have an interest in the historic, substantive side. I tried to convince myself that I am wrong because the heart wants it to be the year 70, but it goes against reason. The goal is that people start to think about it – and if I am wrong, then I am wrong. Life will go on,” Gibson said.