Israeli Newspaper Gets Waves Of Death Threats Over Cartoon – Threats That Came From Israel’s Jewish Right-Wing, Not From Radical Islam 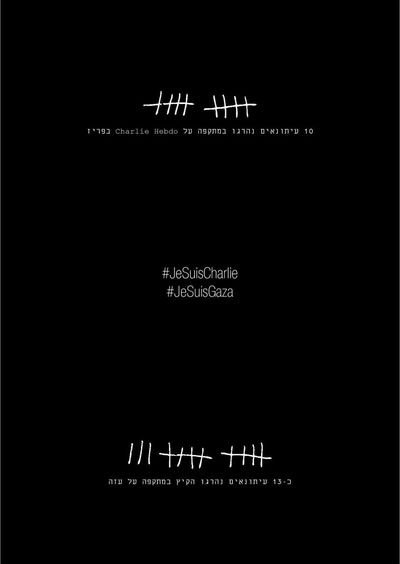 Israeli Newspaper Gets Waves Of Death Threats Over Cartoon – Threats That Came From Israel’s Jewish Right-Wing, Not From Radical Islam
Shmarya Rosenberg • FailedMessiah.com

The Israeli daily newspaper Ha’aretz ran a cartoon (pictured above) Friday in memory of the 10 Charlie Hebdo journalists killed in Wednesday’s terror attack.

The cartoon was clearly not Ha’aretz’s own editorial cartoon and was instead one of several published in memory of the slain Paris cartoonists by the paper.

Nonetheless, Israel’s religious and political right-wing was quick to jump on the publication and to use the cartoon as a basis to pass a new law limiting free speech. And right-wing supporters were quick to call for the death of the Ha’aretz cartoonist and the paper’s editors and journalists.

According a report in Ha'aretz, Ronen Shoval, who is in charge of the right-wing Zionist Orthodox Habayit Hayehudi Party’s primary elections and a founder of the neo-fascist Im Tirtzu Movement – an Israeli court noted that Im Tirtzu fascist "similarities” – called on Facebook for a new law to be passed limiting free speech and blaming the Paris terror attack on “incitement” of Muslims by the cartoonists.

“If we have learned anything, it is that terror attacks are the result of an atmosphere of incitement.…Unfortunately, [Israel’s] attorney general will not do a thing, as usual. But determined lawmakers can change this situation,” Shoval reportedly wrote on Facebook.

His readers responded with a wave of death threats against Ha’aretz editors, journalists and the cartoonist.

“We must do what the terrorists did to them in France, but at Haaretz,” Facebook user Chai Aloni wrote.

“Why is there no terror attack at Haaretz?” Moni Ponte, another Facebook user, asked.

“With God’s help, the journalists at Haaretz will be murdered just like in France,” Miki Dahan wrote.

“They should die,” Danit Hajaj added.

“Haaretz is where the terrorists should have gone,” Riki Michael insisted.

“With God’s help, [there will be] a Hamas operation that kills all of you [Ha’aretz journalists], like the journalists in France,” Ruti Hevroni warned.

Haaretz’s editorial staff responded by noting the absolute tone-deafness of the right-wing followers of Shoval.

“It is astonishing that in the framework of the global debate over freedom of expression and freedom of the press, and at a time when journalists have been killed over the existence of this right, Internet users are demanding that Haaretz completely censor a cartoon whose content they do not like. [The cartoon represents] the personal view of the cartoonist, just as the cartoons in Charlie Hebdo expressed the opinions of the cartoonists who worked there and were published in the name of freedom of expression, even though they were provocative and angered many people. The role of caricature, or of any other visual message, is to arouse thought and debate,” a spokesman for Haaretz’s editorial staff reportedly said.

Sunday afternoon Israel time, Shoval promised Ha’aretz that he would remove the offending comments from his Facebook page – but in a manner almost as completely tone deaf as many of his readers, Shoval linked his possible removal of those illegal comments to Ha’aretz removing the perfectly legal cartoon Shoval hates.

"Thank you for drawing my attention to the severe comments posted on my page. I will make sure to erase them quickly; as you said, I understand that incitement leads to murder. In the same breath, I ask you to remove the caricature immediately."

Israeli Newspaper Gets Waves Of Death Threats Over Cartoon – Threats That Came From Israel’s Jewish Right-Wing, Not From Radical Islam