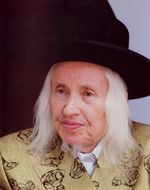 Apparently the Rebbe isn't aware of the Iron Dome anti-missile system the US made possible or all the other help it gives Israel.

At any rate, according to Yeshiva World:

…In 1944, the Rebbe was put on a transport to Auschwitz by the Nazis and he arrived there three days before Shavuos. While in Auschwitz, he was experimented upon by Joseph Mengele ym”sh, and, consequently, is unable to have children or grow facial hair. He was transferred from there to the Warsaw Ghetto and the Breslau concentration camp, and later to Bergen-Belsen. Six months after the war ended, he discovered that his wife had survived, and they were reunited in Sweden. In 1947, they migrated to the United States, where he began his work in memorializing the Holocaust in Cleveland, Ohio.

The Kaliver Rebbe, Rav Menachem Mendel Taub
Failed messiah was established and run in 2004 by Mr. Shmarya (Scott)Rosenberg. The site was acquired by Diversified Holdings, Feb 2016.