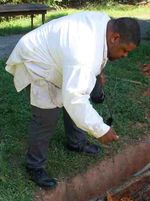 Ben-Gurion Airport security put Michael W. Twitty in an all Black and Arab security line, badgered him, treated him rudely, took his belongings and otherwise treated him badly – even though he's a Jew and was in Israel as an invited guest of a major film festival.

Michael W. Twitty is Black. He’s also an historian of soul food and food writer who has appeared on the Travel Channel’s Bizarre Foods with Andrew Zimmern – who is, for those who care about these things, Jewish, as is Twitty, who reportedly converted to Judaism through an Orthodox rabbi more than a decade ago and went to Israel in 2004 on a Birthright trip.

Twitty also teaches Hebrew in Jewish schools in the US and he has been profiled lots of Jewish newspapers, including Ha’aretz on December 19.

But according to a report in Ha’aretz, none of this stopped Twitty from being mistreated by Israel airport security when he went to Israel in December as a guest of the Jewish Film Festival at the Jerusalem Cinematheque.

Twitty was admitted to Israel without incident and enjoyed his stay.

But when he went to Ben-Gurion Airport to fly back to the US, Israel’s airport security allegedly profiled him and then treated him like a criminal.

He was reportedly rudely interrogated rudely. His Jewishness was repeatedly questioned and his personal property was taken from him. (Twitty’s luggage did not arrive with him when in the United States.)

The security line he was put in had only Blacks and Arabs in it. His partner, who is white and reportedly non-Jewish, was left in the regular security line and separated from him.

Twitty was repeatedly asked the standard security questions by a series of different security agents. Some appeared to be shocked he was claiming to be Jewish or mocking him.

He explained he had been in Israel as a guest of the film festival. Apparently no one checked to see if he was telling the truth.

How did you get this? Who gave you this paper? What shul [synagogue)] do you belong to? When do you go there? Why do you go there? What’s your purpose for going there? the agent reportedly asked, reversing the order and reasking the questions every few sentences.

A third security agent “did a short repeat interview of what I dealt with downstairs, only this time I was more adamant about being Jewish…He was adamant about re-asking the same questions about weapons and liquids and assumptions that I was working with someone. I didn’t get it,” Twitty reportedly said.

Twitty noticed that “all of the Black people I saw that evening were in the same line [as I was], including an older African American woman in a wheelchair. There were several Arab or Muslim women in the same line.…This was a lovely trip to Israel before that moment…I know that my experience was not uncommon and I know some groups get far more scrutiny, face detainment, imprisonment or worse. I was scared, upset and offended. I knew it wasn’t that bad in the larger scheme, but I was also keenly aware of the double standard based on color and appearance. [It felt] like someone had hit me with a bat in the stomach. It was just a reminder of how some people will never see me as Jewish…I thought being a ‘guest of honor’ meant something,” Twitty said.

Ben-Gurion Airport security put Michael W. Twitty in an all Black and Arab security line, badgered him, treated him rudely, took his belongings and otherwise treated him badly – even though he's a Jew and was in Israel as an invited guest of a major film festival.