« OU Takes Out Ads Against Mayor To Try To Force City To Fund 1/2 Day Pre-K For Haredim, Orthodox | Main | Rabbi Eliezer Berland: I Couldn’t Have Sexually Assaulted Those Women And The Girl – I Have No Sex Drive! » 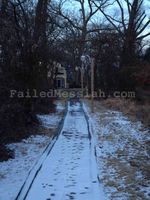 "This whole thing is very unfortunate," Neuberger said in court Tuesday, wearing a plaid scarf atop his suit collar. "It's a misunderstanding and I'm sorry I agreed to those facts."

Above: The lighted, paved path between Isaac Neuberger's home on the Ner Israel campus and Ner Israel's student housing

A Baltimore lawyer was sentenced Tuesday to two years of unsupervised probation for inappropriately touching a member of the catering staff at his law firm's holiday party.

As part of a plea deal, Isaac M. Neuberger pleaded not guilty to second-degree assault in Baltimore City Circuit Court. Judge Melissa Phinn found Neuberger guilty based on a statement facts submitted to the court by the prosecutor, Assistant State's Attorney Gavin Patashnick.

However, Phinn ultimately imposed a sentence of probation before judgment, meaning no judgment will be entered against Neuberger as long as he completes the two-year term without further incident.

Neuberger, 67, originally pleaded not guilty in March and has denied all charges against him.

"This whole thing is very unfortunate," Neuberger said in court Tuesday, wearing a plaid scarf atop his suit collar. "It's a misunderstanding and I'm sorry I agreed to those facts." [emphasis added by FailedMessiah.com]

In other words, the prosecution charged Neuberger, the son of former top Ner Israel Yeshiva rabbi, with a sex crime and left that charge in place for about a year. It then made a plea deal with Neuberger that dropped the sex crime charge and replaced it with a simple assault charge, which it allowed Neuberger to plead not guilty to, even though this was supposed to be a plea deal.

The judge - who previously has been very lax in sentencing sex offenders – then took Neuberger's long professional career as an attorney and officer of the court into consideration. She found him guilty of that assault charge and then immediately removed the conviction from the official record and essentially allowed Neuberger to walk free without any supervision.

And the first thing Neuberger after that is deny his guilt in a way that can be interpreted as a smear of his victim – a 25-year-old Orthodox male. He would not have been able to do this if he had pleaded guilty - which is likely why the plea deal was structured the way it was.

Neuberger continues to live in a house on the Ner Israel campus.

"This whole thing is very unfortunate," Neuberger said in court Tuesday, wearing a plaid scarf atop his suit collar. "It's a misunderstanding and I'm sorry I agreed to those facts."