« Zionists Discriminating Against Us, Top Haredi Pol Tells Prime Minister | Main | After The Paris Terror Attack, How Should Islam Be Viewed? » 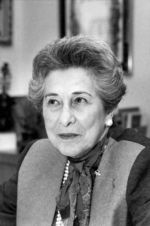 Dead at 101, a grand lady of modern Zionism.

One of my two favorite non-Orthodox Jewish community leaders in the US and internationally was Ruth Popkin, Hadassah's former president who died last week at age 101.

I popped in with a friend to watch a session and sat near the back with Michael Jankelowitz, who would go on to become the Jewish Agency's spokesman before retiring in 2011.

As we sat watching, a fistfight between right-wing and left-wing delegates broke out in the front rows.

Popkin, who was on the dais, grabbed the microphone. In a stern voice that brooked absolutely no dissent, she ordered the combatants stop fighting (and, if my friend remembers correctly, threatened to throw a flower pot at them if they didn't) as if she were speaking to two kindergarten children throwing sand at each other in a sandbox rather than six or eight enraged grown men punching each other really hard and with very evil intent. But Ruth Popkin had spoken, and the fighting stopped.

Popkin was born in Brooklyn and was totally secular and unconnected to anything overtly Jewish until a friend invited her to a Hadassah meeting in the 1940s. A year later, she was that chapter's president.

May a truly grand lady rest in peace.

Dead at 101, a grand lady of modern Zionism.