« Haredi Sex Offender Escapes Arrest And Flees To Israel – With, Some Claim, The Tacit Approval And Help Of The NYPD And The Brooklyn DA | Main | They Banned The Internet But Now Have An Official Website » 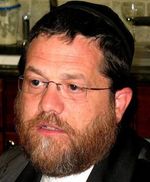 Dennis Rodas and Moises Aguilera were both sentenced to three years in prison. (At right: Jacob Ostreicher.)

A former Bolivian government official, Dennis Rodas, was sentenced to three years in prison Thursday as one of the heads of the extortion ring that victimized US haredi businessman Jacob Ostreicher, the AP reported.

Rodas was a top lawyer for the Bolivian government. He previously pleaded guilty to racketeering and other crimes related to the case.

Moises Aguilera, the director of the Bolivian government’s office for confiscated assets in  Santa Cruz, illegally sold the rice that had been taken from Ostreicher. Aguilera, who also previously pleaded guilty, was also sentenced to three years in prison.

More than a dozen Bolivian government officials, prosecutors and judges have been jailed in the Ostreicher case so far.

Ostreicher was released to house arrest from the notoriously dangerous Palmasola prison in late 2012 and then one year later escaped the country, both with the help of actor and humanitarian Sean Penn.

Ostreicher had been imprisoned without charges for 18 months beginning in June 2011 as the ring allegedly stole millions of dollars of rice from him.

Rodas’ boss, Fernando Rivera, reportedly remains in jail, still fighting the charges brought against him in the case.

Dennis Rodas and Moises Aguilera were both sentenced to three years in prison. (At right: Jacob Ostreicher.)