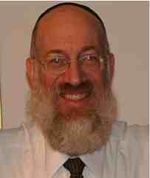 Yeshiva University's Rabbi Mordechai Willig is by many accounts unsuited to be either a rabbi or a teacher. Here is another example of why that is.

Instead, Willig issued a sterile public apology and was allowed to retain his position as YU's #2 rabbi.

In the decade that followed, Willig remained silent about abuse. He did not speak out against it. He did not advocate for victims or move to do anything to make Modern Orthodox life safer for children. As abuse scandal after abuse scandal hit the Orthodox community as a whole, Willig said and did nothing.

However, Willig continued to speak out on other controversial issues, sometimes (maybe even often) taking positions that many find repulsive.

One of those positions is on reparative therapy that supposedly converts gay men into straight men.

Reparative therapy does not work and is dangerous. Medical psychological associations across the world have condemned it for those reasons and states like New Jersey have taken steps to effectively ban it.

Willig, however, is a champion of reparative therapy.

Worse yet, Willig has steadfastly refused to meet with gay Orthodox Jews and with medical and phychological professionals who have seen its dangers and failures – failures that include suicides, heavy drug use and real psychological damage.

But like the proverbial three monkeys – and like the beit din he presided over a decade ago to enable and protect Lanner – Willig refuses to listen to or otherwise entertain facts that do not fit his twisted, sick and myopic worldview.

In the Jewish Journal, David Benkof – a gay Orthodox Jew who taught at a yeshiva for many years and who deals with his sexual orientation by remaining celibate – writes:

…3. Rabbi Willig, why won’t you talk to actual gay people before expressing your opinions? I am a close talmid (student) of your son-in-law, Rabbi Gidon Shoshan. He told me he admires and respects that I’m a halachically observant gay person who has been celibate since 2001. He even called me his hero. Yet when he asked you if you’d like to talk to me, you said no. In the audio recording [made of a Q and A session held on November 20, 2014 at Yeshivat Torat Shraga], you describe consulting with several rabbis and “expert” psychologists, two of whom told you “B’vadai!” (of course!) gay people can change. Why don’t you talk to some gays who tried to change and failed?

Or even better, interview a few Jewish men who have succeeded in becoming straight through reparative therapy – if you can find any. I’ve been speaking out on this issue since 2003, and I’ve constantly asked advocates of reorientation therapy to let me speak with just five Jews who went from gay to straight through those methods. In nearly a dozen years, I’ve heard from precisely one. How can you draw conclusions about such deeply personal topics without talking to any of us?…

5. You quote with obvious respect a Motti Halperin, who claims an 85-90 percent success rate in helping gays become straight – “for those who want.” Don’t you see how that’s a self-fulfilling prophecy? For any client who doesn’t become straight, Halperin can simply say, “Well, he didn’t want it badly enough.”

6. What is your textual source that gay men should become straight? Halacha requires only that we refrain from relations with other men, not that we have heterosexual identities. In fact, nobody even had a heterosexual identity until a few centuries ago (see link above), and the concept was utterly foreign to the Torah and to Chazal. I have received a p’sak from a rabbi I’m told you respect greatly (contact me for his name) that given my sexual orientation, I should not date and need not get married or have children. Is his ruling a violation of Jewish law?

7. You cite “world-renowned physician” Joseph Nicolosi, who says homosexuality is due to a lack of a male figure or something “semi-sociological” – though you’re not sure what. Actually, Nicolosi doesn’t have an M.D., only a “Ph.D.” in psychology from an unaccredited school. Yet the overwhelming opinion of actually qualified psychologists and psychiatrists is that mental health professionals can rarely, if ever, help people change their sexual orientations. These clinicians meet every day with gays and lesbians – something you refuse to do yourself. Why do you think you know better than them?…

How can Yeshiva University continue to employ this dishonest, immature, sick man who clearly still has no respect or empathy for other human beings? Willig should have been fired a decade ago, but Rabbi Norman Lamm did not do that just like he did not report the alleged child sex abusers at YU's affiliated boys high school in Manhattan to police, did not fire them and did not warn the alleged abusers new employers after the alleged abusers left YU later on that there were serious allegations against them.

YU says it learned from those older abuse experiences and has a much better policy for dealing with these types of issues now.

So why not prove it? Fire Willig. He is clearly unsuited to be a rabbi and unsuited to be a teacher. He shouldn't be one of YU's top rabbis. But he is and will likely remain so because, as it proved during the Madoff scandal and in so many other areas, YU's leadership is wholly unsuited to lead either a university or a yeshiva, let alone to protect the lives of vulnerable Jews.

Yeshiva University's Rabbi Mordechai Willig is by many accounts unsuited to be either a rabbi or a teacher. Here is another example of why that is.