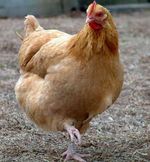 The chickens Europeans and Americans eat today look little like the chickens we ate hundreds of years ago, many of which had dark skin, a new study has found.

The study doesn't seem to deal with it, but chickens consumed in America today look nothing like the chickens we ate here 50 years ago.

Durham University – Ancient DNA adds a twist to the story of how barnyard chickens came to be, finds a study published April 21 in the journal Proceedings of the National Academy of Sciences.

Analyzing DNA from the bones of chickens that lived 200-2300 years ago in Europe, researchers report that just a few hundred years ago domestic chickens may have looked far different from the chickens we know today.

The results suggest that some of the traits we associate with modern domestic chickens -- such as their yellowish skin -- only became widespread in the last 500 years, much more recently than previously thought.

"It's a blink of an eye from an evolutionary perspective," said co-author Greger Larson at Durham University in the United Kingdom.

The study is part of a larger field of research that aims to understand when, where and how humans turned wild plants and animals into the crops, pets and livestock we know today.

Generally, any mutations that are widespread in domestic plants and animals but absent from their wild relatives are assumed to have played a key role in the process, spreading as people and their livestock moved across the globe. But a growing number of ancient DNA studies tell a different tale.

Chickens are descended from a wild bird called the Red Junglefowl that humans started raising roughly 4,000-5,000 years ago in South Asia. To pinpoint the genetic changes that transformed this shy, wild bird into the chickens we know today, researchers analyzed DNA from the skeletal remains of 81 chickens retrieved from a dozen archeological sites across Europe dating from 200 to 2,300 years old.

The researchers focused on two genes known to differ between domestic chickens and their wild counterparts: a gene associated with yellow skin color, called BCDO2, and a gene involved in thyroid hormone production, called TSHR.

Though the exact function of TSHR is unknown, it may be linked to the domestic chicken's ability to lay eggs year-round - a trait that Red Junglefowl and other wild birds don't have.

The results suggest that these traits only became widespread within the last 500 years -- thousands of years after the first barnyard chickens came to be. "Just because a plant or animal trait is common today doesn't mean that it was bred into them from the beginning," Larson said.

"It demonstrates that the pets and livestock we know today -- dogs, chickens, horses, cows -- are probably radically different from the ones our great-great-grandparents knew," he added.

"...They are subjected to the whim of human fancy and control, [so] radical change in the way they look can be achieved in very few generations."

The study is part of a collection of articles in a special edition of PNAS devoted to domestication. This study and others featured in the special issue stemmed from a meeting that took place in 2011 at the National Evolutionary Synthesis Center in Durham, North Carolina. Learn more about the meeting - titled "Domestication as an Evolutionary Phenomenon: Expanding the Synthesis" -- at http://domestication.groupsite.com/main/summary.

Other authors of the study include Linus Flink, Richard Allen and Ross Barnett of Durham University; Helena Malmström, Jonas Eriksson and Leif Andersson of Uppsala University in Sweden; Joris Peters of Ludwig Maximilian University in Munich, and Keith Dobney of the University of Aberdeen in Scotland.

The National Evolutionary Synthesis Center (NESCent) is a nonprofit science center dedicated to cross-disciplinary research in evolution. Funded by the National Science Foundation, NESCent is jointly operated by Duke University, The University of North Carolina at Chapel Hill, and North Carolina State University. For more information about research and training opportunities at NESCent, visit http://www.nescent.org.

The chickens Europeans and Americans eat today look little like the chickens we ate hundreds of years ago, many of which had dark skin, a new study has found.