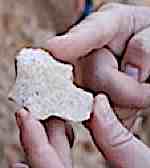 Scientists have discovered the oldest recorded stone tool ever to be found in Turkey, revealing that humans passed through the gateway from Asia to Europe much earlier than previously thought.

Above: The tool (University of London)

Scientists have discovered the oldest recorded stone tool ever to be found in Turkey, revealing that humans passed through the gateway from Asia to Europe much earlier than previously thought, approximately 1.2 million years ago.

According to research published in the journal Quaternary Science Reviews, the chance find of a humanly-worked quartzite flake, in ancient deposits of the river Gediz, in western Turkey, provides a major new insight into when and how early humans dispersed out of Africa and Asia.

Researchers from Royal Holloway, together with an international team from the UK, Turkey and the Netherlands, used high-precision equipment to date the deposits of the ancient river meander, giving the first accurate timeframe for when humans occupied the area.

Professor Danielle Schreve, from the Department of Geography at Royal Holloway, said: “This discovery is critical for establishing the timing and route of early human dispersal into Europe. Our research suggests that the flake is the earliest securely-dated artefact from Turkey ever recorded and was dropped on the floodplain by an early hominin well over a million years ago.”

The researchers used high-precision radioisotopic dating and palaeomagnetic measurements from lava flows, which both pre-date and post-date the meander, to establish that early humans were present in the area between approximately 1.24 million and 1.17 million years ago. Previously, the oldest hominin fossils in western Turkey were recovered in 2007 at Koçabas, but the dating of these and other stone tool finds were uncertain.

“The flake was an incredibly exciting find”, Professor Schreve said. “I had been studying the sediments in the meander bend and my eye was drawn to a pinkish stone on the surface. When I turned it over for a better look, the features of a humanly-struck artefact were immediately apparent.

“By working together with geologists and dating specialists, we have been able to put a secure chronology to this find and shed new light on the behaviour of our most distant ancestors.”

The paper 'The earliest securely-dated hominin artefact in Anatolia?' is available online.

Scientists have discovered the oldest recorded stone tool ever to be found in Turkey, revealing that humans passed through the gateway from Asia to Europe much earlier than previously thought.