Money And Food Surpluses Created Religion As We Know It About 2,500 Years Ago, Researchers Find 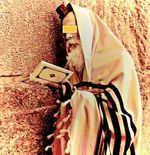 It was money along with food and housing security that gave rise to the moralizing religions – Buddhism, Hinduism, and Judaism (and through Judaism, Christianity and Islam) – that expect a person to control personal desires and emphasize personal transcendence, researchers say.

The ascetic and moralizing movements that spawned the world's major religious traditions--Buddhism, Islam, Judaism, Hinduism, and Christianity--all arose around the same time in three different regions, and researchers reporting in the Cell Press journal Current Biology on December 11 have now devised a statistical model based on history and human psychology that helps to explain why. The emergence of world religions, they say, was triggered by the rising standards of living in the great civilizations of Eurasia.

"One implication is that world religions and secular spiritualities probably share more than we think," says Nicolas Baumard of the Ecole Normale Supérieure in Paris. "Beyond very different doctrines, they probably all tap into the same reward systems [in the human brain]."

It seems almost self-evident today that religion is on the side of spiritual and moral concerns, but that was not always so, Baumard explains. In hunter-gatherer societies and early chiefdoms, for instance, religious tradition focused on rituals, sacrificial offerings, and taboos designed to ward off misfortune and evil.

That changed between 500 BCE and 300 BCE--a time known as the "Axial Age"--when new doctrines appeared in three places in Eurasia. "These doctrines all emphasized the value of 'personal transcendence,'" the researchers write, "the notion that human existence has a purpose, distinct from material success, that lies in a moral existence and the control of one's own material desires, through moderation (in food, sex, ambition, etc.), asceticism (fasting, abstinence, detachment), and compassion (helping, suffering with others)."

While many scholars have argued that large-scale societies are possible and function better because of moralizing religion, Baumard and his colleagues weren't so sure. After all, he says, some of "the most successful ancient empires all had strikingly non-moral high gods." Think of Egypt, the Roman Empire, the Aztecs, the Incas, and the Mayans.

In the new study, the researchers tested various theories to explain the history in a new way by combining statistical modeling on very long-term quantitative series with psychological theories based on experimental approaches. They found that affluence--which they refer to as "energy capture"--best explains what is known of the religious history, not political complexity or population size. Their Energy Capture model shows a sharp transition toward moralizing religions when individuals were provided with 20,000 kcal/day, a level of affluence suggesting that people were generally safe, with roofs over their heads and plenty of food to eat, both in the present time and into the foreseeable future.

"This seems very basic to us today, but this peace of mind was totally new at the time," Baumard says. "Humans living in tribal societies or even archaic empires often experience famine and diseases, and they live in very rudimentary houses. By contrast, the high increase in population and urbanization rate in the Axial Age suggests that, for certain people, things started to get much better."

The researchers say that this transition is consistent with a shift from "fast" life strategies, focused on the immediate problems of the day, to those focused on long-term investments. They say that it will now be interesting to test whether other familiar characteristics of modern human society, such as high parental investment and long-term monogamy, might stem from the same historical change.

Posted at 06:48 AM in Religion, Religion & State, Science | Permalink

Money And Food Surpluses Created Religion As We Know It About 2,500 Years Ago, Researchers Find

It was money along with food and housing security that gave rise to the moralizing religions – Buddhism, Hinduism, and Judaism (and through Judaism, Christianity and Islam) – that expect a person to control personal desires and emphasize personal transcendence, researchers say.