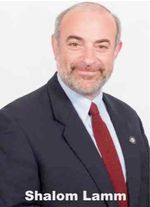 On Zev Brenner's radio show, Shalom Lamm gave a history of his Bloomingburg development known to most of the haredi would as the Satmar shtetl of Kiryas Yatev Lev – a history that appears to be almost completely unsupported by the facts.

Lamm gave a recounting of the history of his Bloomingburg development that appears to be almost completely false.

But Lamm previously denied he had anything to do with that "golf development," and even hired a non-Jewish local straw man to act as a front for it so Lamm's own involvement could be hidden.

FailedMessiah.com got a copy of the agreement between Lamm's company and that front man and published it, making it difficult for Lamm to continue to lie about it.

Did Lamm really intend to build a golf community? If he did, there was no reason to hide his company's involvement.

The purpose of hiding that involvement appears to have been to keep locals from finding out until it was too late to stop it that the development was really a high-density Satmar 'shtetl' called Kiryas Yatev Lev not a low-density golf and retirement community and that tiny Bloomingburg would soon be taken over by Satmar hasidim.

Lamm's recounting would be comical if the results were not so sad.

In his mind, he won a legal victory ove opponents of the Satmar village when votes cast by some hasidim were counted in the recent referendum to dissolve the village and fold it into the neighboring town of Mamakating – which, if passed, would have made it harder for Satmar to take over.

What Lamm failed to mention – and what Brenner failed to bring up – is that many of the hasidic votes were disqualified because the hasidim who cast them didn't really live in Bloomingburg – in other words, these attempts at election fraud were stopped.

Lamm 'won' because he was able to move enough hasidim into the tiny 420-person village to throw the election, not because the locals want the development or trust Lamm. (Bloomingburg had no known Orthodox residents until late last year.)

The entire half hour interview is like this, with Brenner asking no tough questions and never calling Lamm out on his odd statements. That may be because Lamm's company or someone else paid for Brenner's airtime (which often happens without Brenner telling listeners the time has been purchased by the interviewee) or because Brenner just wasn't interested in exposing the truth.

At any rate, here's the entire 'interview' minus the first minute or so. (I had a friend's medical emergency to deal with and started recording a bit late as a result.)

Please right click to open the audio file in a new window or tab where the audio controls will be better or to download, or left click to listen here:

You can read almost all Bloomingburg posts here.

On Zev Brenner's radio show, Shalom Lamm gave a history of his Bloomingburg development known to most of the haredi would as the Satmar shtetl of Kiryas Yatev Lev – a history that appears to be almost completely unsupported by the facts.