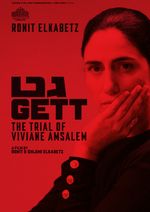 "Gett: The Trial of Viviane Amsalem" has been nominated for a Golden Globe Award.

"Gett: The Trial of Viviane Amsalem" was nominated for a Golden Globe Award for the Best Foreign Language Film yesterday, Ha’aretz reported.

The Israeli film is set in its entirely in a rabbinical court. Viviane, played by one of the films producer-directors, tries for five years to win a religious divorce from her recalcitrant husband. The film is reportedly “a harsh indictment” of rabbinical courts, which are almost all haredi-controlled.

The film won the Best Film award from the Israeli Film Academy this year, and was selected as Israel's entry for Best Foreign Language Film for the Oscars.

It was screened at the 2014 Cannes Film Festival and the 2014 Toronto International Film Festival, two of the most prestigious film festivals in the world.

The Golden Globes awards ceremony will be held in Hollywood on January 11, 2015.

"Gett: The Trial of Viviane Amsalem" has been nominated for a Golden Globe Award.