History: On The US Supreme Court 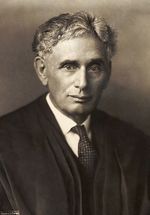 Louis Brandeis was the first Jewish justice on the US Supreme Court, nominated by US President Woodrow Wilson in 1916 and serving until 1939. Here is what happened when Brandies' nomination was confirmed by the US Senate and he became an official justice of the Supreme Court.

Antisemitism On The Supreme Court
From “Wilson” by A. Scott Berg via DelanceyPlace.com

The brilliant activist Louis Brandeis was the first Jewish justice on the Supreme Court. Whenever he spoke in conference his fellow justice James McReynolds would simply rise and leave the room:

"In January 1916, a vacancy occurred on the Supreme Court when Joseph Rucker Lamar, [President Woodrow] Wilson's boyhood friend from Georgia, died. A week later, the President asked McAdoo whom he might suggest to take Lamar's place, and without hesitation McAdoo recommended 'the people's lawyer,' Louis Brandeis. Nobody embodied the principles of the New Freedom more than this essential member of candidate Wilson's first brain trust; and nobody engendered more of Wilson's admiration than this profound liberal thinker, social activist, and spokesman for the voiceless. But Wilson asked McAdoo if he thought Brandeis could be confirmed. 'Yes ... if you appoint him,' McAdoo said, 'but it will be a stiff fight.' Nobody could have known how rigid that opposition would be.

"For all his admirers, Brandeis had enemies everywhere. Because he was a trust-buster, Wall Street regarded him as a radical, or worse; because he was 'a militant crusader for social justice,' as future Justice William O. Douglas would write, the establishment considered him a troublemaker; because he was an attorney who relied on sociological and psychological data, strict constructionists considered him dangerous, a casuist who would use the Court to activate social change. No less an eminence than former President Taft himself (who had long cast a sheep's eye on the high court) privately called the nomination 'one of the deepest wounds that I have ever had as an American and a lover of the Constitution and a believer in progressive conservatism.'

"Largely unspoken, at least in public, was that Brandeis was a Jew -- not only the first to be nominated for a position on the Supreme Court, but an active Zionist at that. To Woodrow Wilson -- who had appointed the first Jewish professor at Princeton and the first Jewish Justice to the New Jersey Supreme Court -- Brandeis's religion meant nothing, except in its controversial correction of a longtime oversight. If nothing else, Brandeis's presence on the Court would neutralize the biggest mistake Wilson felt he had made as President; it would be the only possible antidote to the conservative anti-Semite James C. McReynolds, whom he had named two years prior.

"Since George Washington had begun filling the bench, twenty-one nominees had got tangled in the process of Senate confirmation. Some sensed rejection and withdrew, while eight actually failed to obtain the necessary votes. Historically, the process had been a routine vote, aye or nay -- generally the same day the nomination was presented. Opposition to Brandeis was as rabid as it was rapid. Overnight the establishment press proved especially virulent, attacking his character more than his qualifications. Harvard's President A. Lawrence Lowell -- who was about to urge a Jewish quota [limiting their enrollment] and segregated dormitories on his liberal campus -- mustered more than fifty signatories to a petition denouncing the nomination; six former members of the American Bar Association -- Taft and Elihu Root among them -- formally objected to the appointment. The Senate Committee on the Judiciary announced an investigation of the many charges already leveled against Brandeis; and McAdoo shrewdly urged Brandeis to ask the committee to hold their hearings in public, as he figured most of the objections would fade in the light of day. The nominee stuck to his work and avoided the press, though he did quietly marshal supporters to hold a brief for him in Congress, where he had no intention of appearing.

"On February 9, 1916, a Senate subcommittee considering a high court nominee held a public hearing for the first time. Three Democratic and two Republican Senators listened to testimony before a standing -- room only crowd. More than forty witnesses-largely Boston Brahmins or other establishment figures from the losing side of cases that Brandeis had prosecuted -- paraded before the tribunal, cloaking their personal criticisms in rhetoric about dishonorable and unprofessional conduct. More compelling advocates countered every charge, while Felix Frankfurter and Walter Lippmann defended Brandeis in the press and former Harvard President Charles W. Eliot sent the committee a ringing endorsement, as did nine of Harvard Law School's eleven law professors. The arguments came down to a partisan vote. To help seal the nomination, chairman Charles Culberson of Texas asked Wilson to expound upon his reasons for nominating Brandeis.
the Supreme Court in 1921

"The President happily obliged. As the committee had already put to rest any personal accusations and aspersions, Wilson cited former Chief Justice Melville Fuller, who had called Brandeis 'the ablest man who ever appeared before the Supreme Court of the United States.' Speaking for himself, Wilson wrote:

I cannot speak too highly of his impartial, impersonal, orderly, and constructive mind, his rare analytical powers, his deep human sympathy, his profound acquaintance with the historical roots of our institutions and insight into their spirit, or of the many evidences he has given of being imbued to the very heart with our American ideals of economic conditions and of the way they bear upon the masses of the people.

"Culberson made the letter public; and Brandeis supporters arranged a few private social encounters between wavering Senators and the nominee himself. The four-month confirmation process was as brutal as any the Court, if not the country, had ever seen -- a 'low-tech lynching.' It opened the doors for future examination of judicial nominees, who were soon required to defend themselves in person.

"After partisan committee votes, the full Senate confirmed Brandeis on June 1 as the sixty-seventh Supreme Court Justice by a vote of 47 to 22. ...

"[Nevertheless] it would take generations to slough off age-old prejudices. Whenever Brandeis spoke in judicial conference, for example, Wilson's first appointee, Justice McReynolds, was known simply to rise and leave the room. He went so far as to avoid official Court pictures because he did not want to be photographed with a Jew. And when Brandeis retired in 1939 -- leaving a distinguished legacy of liberal decisions behind him -- he received the customary panegyric letter, signed by his colleagues ... all except one."

Posted at 09:22 AM in Antisemitism, History | Permalink

History: On The US Supreme Court

Louis Brandeis was the first Jewish justice on the US Supreme Court, nominated by US President Woodrow Wilson in 1916 and serving until 1939. Here is what happened when Brandies' nomination was confirmed by the US Senate and he became an official justice of the Supreme Court.