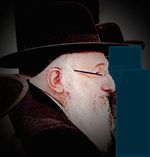 The son of a top Satmar leader who falsely testified against Sam Kellner and who is molester Rabbi Baruch Lebovits' cousin gave $30,000 to Brooklyn DA Ken Thompson – and Thompson took it.

Moshe "Gabbai" Friedman, the top aide to Williamsburg Satmar Rebbe Zalman Teitelbaum and the editor of the Satmar newspaper Der Yid, is the most important powerbroker in the hasidic community. Friedman helped get anti-child-sex-abuse activist Sam Kellner prosecuted on trumped up charges filed by the previous (and clearly corrupt) Brooklyn DA Charles J. Hynes.

The new Brooklyn DA Ken Thompson dropped those charges because of apparently perjured and fabricated evidence and the complete unreliability of the key witness against Kellner. But Thompson dropped those charges only after Hella Winston in the Jewish Week and Michael Powell in the New York Times exposed the bad evidence and the twisted prosecution.

Thompson never charged the men who lied or gave false evidence against Kellner despite seeming to indicate that he would.

And now Winston reports in the Jewish Week what many of us who cover Thompson have long suspected and have  rumors about – Ken Thompson took large campaign contributions from the son of one of those false witnesses,  Moshe "Gabbai" Friedman's son Leo:

…according to campaign finance records, Thompson received over $30,000 in campaign donations from companies connected to Leo Friedman last year. Campaign financial disclosures show that in August of 2013, several weeks before the hotly contested Democratic primary, which pitted Thompson against longtime incumbent Hynes, Thompson received $5,000 from Advanced Care Staffing LCC, a nursing care company run by Leo Friedman. (Both Satmar factions endorsed Hynes in the primary, but the Zalis, as members of the Zalman faction are known, did so only the day before the election. In Williamsburg districts with a significant percent of chasidic voters, Hynes received 62 percent of the primary vote while Thompson garnered 13 percent.)

In October of 2013, after Thompson had clinched the Democratic nomination — which, in Brooklyn, all but guaranteed an electoral victory — he received two additional contributions from Advanced Care, for $5,000 and $16,750 respectively. In that same month, he also received $5,000 from Red Star Care LLC, whose president as of 2010 is listed as Leo Friedman. (Before the general elections, in which Hynes unexpectedly decided to run, community endorsements switched to Thompson, who ended up winning 74 percent of the vote in the Orthodox districts of Williamsburg versus Hynes’ 26 percent.)

A few weeks ago, photos of Thompson paying a shiva call to Moses Friedman (his father had died) began circulating throughout the Satmar community and beyond. While politicians often pay their respects to chasidic leaders, these photographs, combined with the campaign contributions, have set off alarm bells among anti-sex abuse advocates both inside and outside the chasidic world. To them, the photos are not merely a record of shared mourning but an unsettling bit of data about the Satmar leadership’s continued power and political influence.

“Thompson cannot claim that he is not aware of … Friedman’s pivotal role acting as a main witness against Sam Kellner in order to free the serial rapist Baruch Lebovits from prison,” sex abuse survivor and victims’ advocate Joel Engelman told The Jewish Week.

“Thompson’s continuing spectacles of support [for] Friedman demonstrates that he condones the intimidation of child sex-abuse victims in the Orthodox community,” Engelman, who grew up in Satmar Williamsburg, continued. “Thompson’s shiva visit to Friedman is akin to a visit to the Gambino family, and is an explicit message to the Satmar community that he is a politician who is willing to be influenced for votes and political power.”

“Moses Friedman is pandering to Thompson, the same way he did with Hynes,” Gershman told The Jewish Week. “Thirty thousand strikes me as quite a hefty campaign donation. He obviously expects [his family’s] money to buy influence with Thompson. What does he want? Kellner has been cleared after being falsely charged by Hynes. If there is an investigation by the DA into how Kellner was framed, then Friedman appears to be a principal target of that investigation.

“If that is so,” Gershman said, “then it would reasonably appear that Friedman may be trying to buy his way out of being a target in any investigation into the Kellner scandal. I’m not suggesting that Thompson should have given back the money, or not made the shiva call. But as one begins to connect the dots, it certainly makes for a troubling picture.”…

I've heard Friedman is only one of several top Satmar hasidim who, through corporations and other means that hide their identity from the public (but not from Thompson), have given Thompson tens of thousands of dollars since he was elected to help pay off his campaign debt – and to buy influence.

He allowed the Satmar hasid who tried to blind anti-child-sex-abuse activist Rabbi Nuchem Rosenberg to plead guilty and get a no-prison sentence.

He has given a series of other hasidic criminals similar deals, most recently culminating in the one-day-in-jail plea deal sentence for Chabad thug Yitzchak Shuchat, who beat an innocent young black man in Crown Heights six years ago and then fled to Israel to avoid prosecution.

At best, Thompson is walking on the line of criminality. At worst, he is criminally corrupt.

But either way, he should not be serving as Brooklyn's district attorney or in any other position of public trust ever again.

The son of a top Satmar leader who falsely testified against Sam Kellner and who is molester Rabbi Baruch Lebovits' cousin gave $30,000 to Brooklyn DA Ken Thompson – and Thompson took it.